Disto v.3 – Simply the best emulation of a classic, improved. 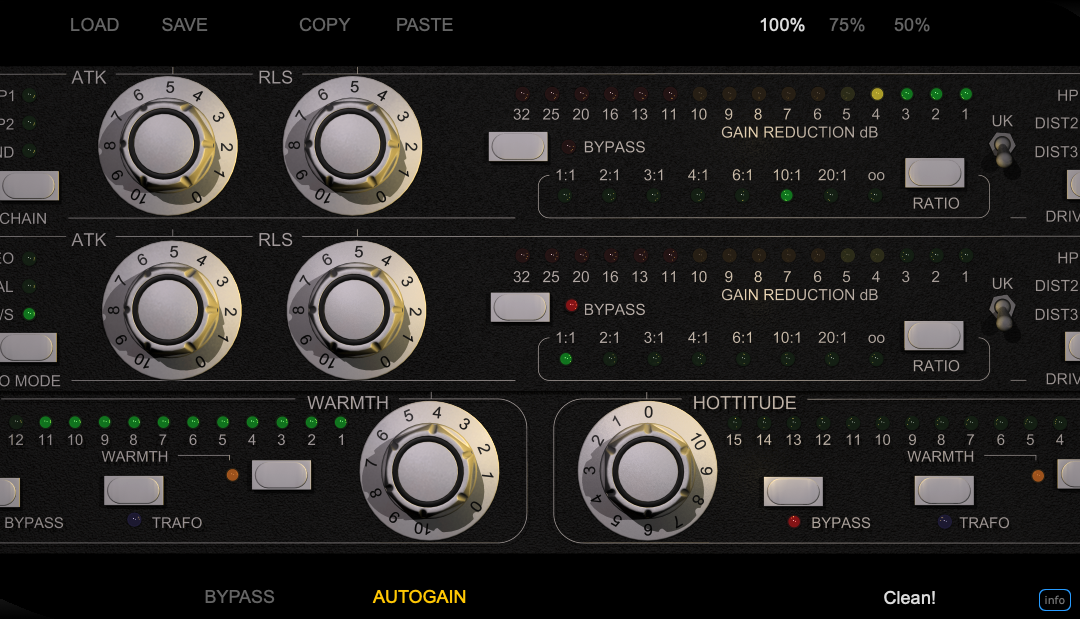 Disto is a faithful emulation of one of the best compressors: a Distressor* by Empirical Labs*.

It includes all the features of the original hardware unit plus some modern extensions like a Mid/Side encoding matrix for special processing of stereo signals.

Being the hardware unit mono (it processes only one audio channel), we included a couple of them, with the Mid/Side matrix around them. The first (top) unit controls both channels when in stereo mode or the Mid component in Mid/Side mode. The second unit (middle) is an active interface for Side in Mid/side mode only.

The third unit (bottom) extends the functions of the rack, by adding more features from another great unit from the same manufacturer.

This new version 3 (v.3) integrates the algorithm from previous Disto-S into the complete structure of Disto. The menu at the bottom lets you pick one out of four (!) different algorithms that vastly extend the possibilities of the original hardware, giving Disto an almost endless range of possibilities to control dynamics in a creative, easy and pleasant way. Select “Faithful” mode for the algorithm from Disto-S.

v.3 includes a new “range” option switch for the Hottitude control. Set it to “wide” for the original range or the other way for a narrow gain range and finer control on the headroom.

Use the search field on top of this page, writing “Disto”, for overall instructions (from previous versions), examples, presets.

Disto v.3 is available NOW in the Webshop as a VST/AU/AAX for Windows and Mac OSX systems.

It is a free upgrade for existing owners (they can simply download it from their user area).

A demo version is available for download (VST/AU/AAX for Windows and Mac OSX systems). It is fully functional for 14 days (see included readme file).

Get the demo version HERE

IMPORTANT NOTE: Disto-S remains an active product, also with its AAX-DSP version, and is being included in the download. It was upgraded to the new activation system.

*Company names, brands and product names are ownership of the respective owners.