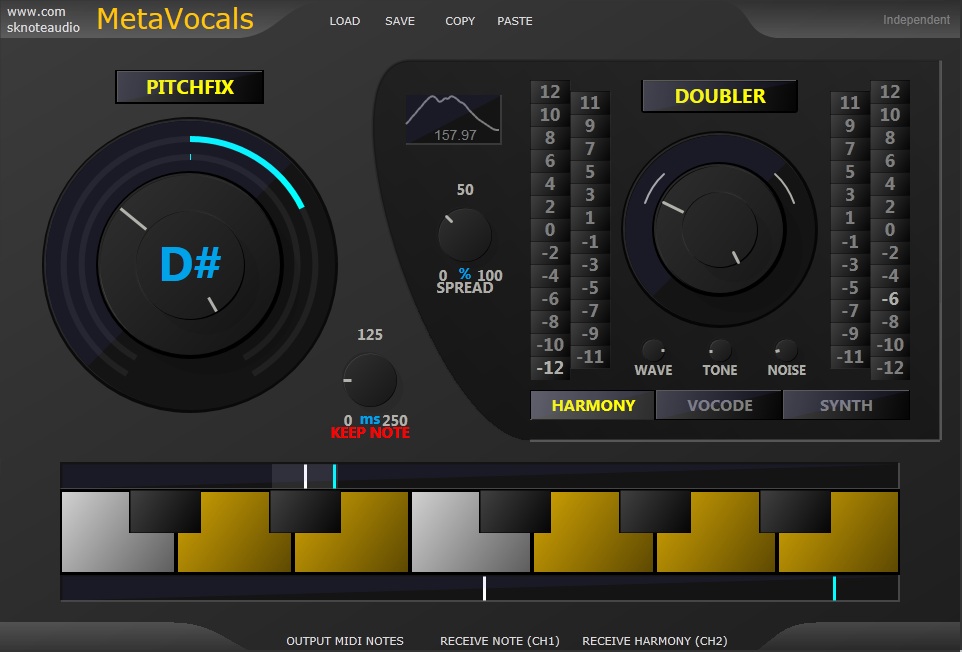 This is the Automatic Tuning section, the core of the system. Continuosly detects the base pitch of the incoming mono-phonic signal and shifts the pitch, depending on the settings.

Step 1 – Engage PitchFix, set the amount of action (top knob to full clock-wise), set the time needed for the automatic shifter to reach the maximum action (start with the fastest action, full conter-clock-wise).

Step 2 – Filter the notes. On the keyboard, switch the notes to be excluded from the scale to off (full yellow). The simplest way of doing this is to set a loop on the song, let it loop and exclude the notes that sound wrong. Often, keeping more notes than the active scale contains is useful to keep the performance natural, if the wrong notes are used just for smooth passages. As an alternative, set the active notes to those of the active scale, try to activate some optional notes that allow a better performance.

Step 3 – Set the timing. By using the bottom (external) knob, increase the time until the performance sounds natural. Note that slower timing also keeps more variation in the pitch (vibrato, natural variations). Starting with the fastest action helps to set the best values for the other parameters. Once set, the action can be slowed down.

Step 5 – Set a minimum duration for a single note (optional). The Keep-Note knob could be useful when the detector outputs wrong, quick changing, notes. If it is happening, try increasing this parameter a bit.

TIP: MetaVocals can use a MIDI track as an editor (see below). Setting the parameters to the best possible values BEFORE generating the track is the right thing to do.

To monitor the pitch: detected and output pitch are visible in three different positions:

PitchFix circular meter – Output meter is original pitch, internal meter is corrected pitch. Range is half a semitone (50 cents) on each side.

Keyboard top screen – A small rectangle places the meter above the target semitone. A couple of lines inside the meter show the original pitch and the output pitch, with the ideal target pitch at he center of the range. Range is half a semitone (50 cents) on each side.

Keyboard bottom screen – This is the same as above but on the full width of the keyboard, for higher resolution. Range is half a semitone (50 cents) on each side.

This is the Doubling and Harmonising section. Generates additional voices on top of the original one. Everything is shifted together with the main voice, they share the correction (if engaged).

Step 1 – Set the mode to Harmony by the selector at the bottom of the section. Instructs the section to generate transposed copies (keeping the formants) of the main signal.

Step 2 – Set the volume of the new part(s) to maximum by the top knob.

Step 3 – Engage the Doubler section by the big button on top.

Step 4 – Engage the additional voice(s). The two columns besides the knobs define the semitone shift for each one of the two available voices. This is a relative shift, from an octave down to an octave up. A grey button is un-selected. A white button is selected but inactive. A red button is active. To disable an active voice, click on its red button to toggle it inactive. This shift is relative. If you are used to think in a musical fashion (e.g. “F minor”), you can simply relate the chord to its tonic in terms of distances and drop the tonic (“F minor” is F, G#, C -> 0, 3, 7. Set the voices to 3 and 7. It means “minor chord”).

Step 5 – Set the stereo width of the new parts by the bottom (external) knob.

Step 6 – Set the amount of Spread by the dedicated knob.

For a really meaningful use of this section, you’ll want to use the MIDI control as described below.

MIDI control – Using an host’s MIDI track as an editor.

MetaVocals can output MIDI notes that track the pitch as detected by the PitchFix section. These note can be used to be recorded on a track for successive use as an editor or used to control a following, external module with MIDI input (e.g. a synthesizer plugin).

To build full editor content in your host’s standard MIDI editor, record the output of the whole part to a new MIDI track. Switch Output MIDI Notes off when completed.

To use the new MIDI track as an editor, engage the Receive Note (ch1) button at the bottom and ensure that the output of the MIDI track is received by MetaVocals. Any note received on MIDI channel 1 will control the target note on the keyboard (the control will be fixed until a corresponding note-off is received). To manually modify something as detected by PitchFix, move the note on the MIDI editor.

Tip – beware of closed loops. Always engage MIDI in OR MIDI out and relevant controls on host’s mixer.

Any MIDI note received by MetaVocals on MIDI channel 2 is used to control Doubler’s voices. If no voice is active, the first voice (left) is set and activated. It is deactivated on relevant note off. If a voice is already active the second voice is activated.

Notes are always related to C1. So, for example, to set a F minor chord, drop the F, think of minor as +3 and +7 distances, set these notes relatively to C1 (Eb and G).

As an alternative way of thinking about this: F minor -> Translate to C minor -> Eb and G (always think “C”).

The level of the additional voices is controlled by the top knob.

MetaVocals can use its detection system to drive internal oscillator(s). The main oscillator is linked to the incoming signal (auto-tuned if the PitchFix section is engaged). The optional, additional oscillators are linked to Doubler’s additional voices, as set by the semitone shift controls.

These oscillators can be programmed to a sound by the set of three controls at the base of the Doubler section.

Synth mode – The oscillators are sent to the output. The top knob controls the mix between the original (auto-tuned, if engaged) voice (CCW) and the oscillators (CW).

Vocode mode – The oscillators are sent through a vocoding section. It is a filter that keeps a dynamic shape similar to input’s spectrum envelope. MetaVocals actually acts like a synth whose oscillator(s) and filter are controlled by the incoming voice. Note how this is different from the classic concept of a vocoder, where modulator and modulated pitches are completely unrelated.