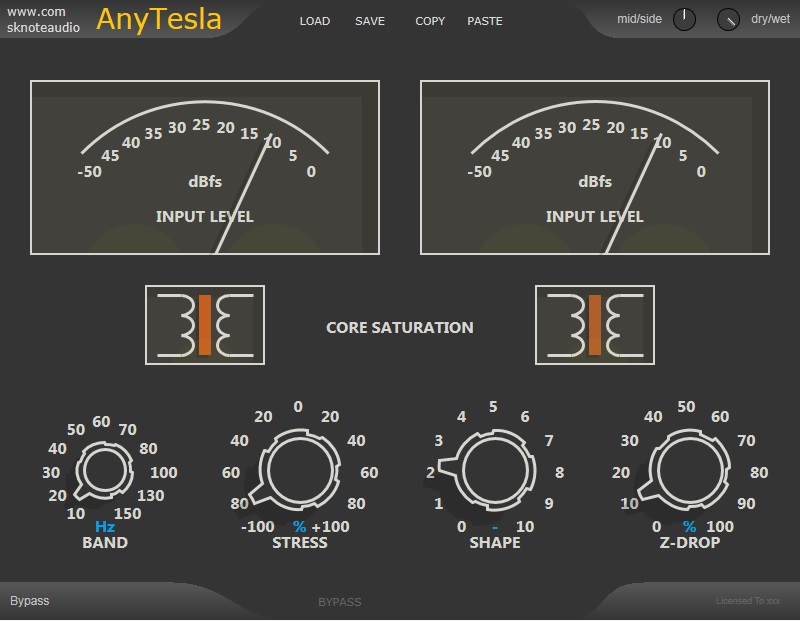 One of those powerful yet simple contributes to sound, input and output transformers.

AnyTesla contains a parametric physical models of audio transformers and an optional power output stage (because the saturation of a core gives effects on both output and input coils).

Transformers can be an important part of tracks’ sound with unique contributes from bass enhancement to harmonic distortion. One of their interesting characteristic is how they compress lower frequencies more and don’t limit signal’s levels, so keeping the original dynamics while enhancing the sound with harmonics.

– Sample-aligned Dry-Wet mix control.
– Mid/Side control, to balance the stereo field.
– Through-clipboard preset management system (copy and paste between instances).
– True Auto-Gain for easy and fair sound comparisons.
– Macro, continuous choice of the style of the transformer (from vintage and smooth to modern and aggressive) under a single “Shape” control.

Available as VST/AU/AAX and also coming as AAX-DSP for Avid HDX and Venue systems (transformers on every console channel) for Windows and Mac systems, 32 and 64 bit, in the Webshop.

Here is a video showing the benefits of the cumulative effect of audio transformers on a mix. We added AnyTesla to every mixer channel, then compared the result with the original sound:

AnyTesla models a couple of audio transformers and an optional power stage at its input.

The behaviour of an audio transformer is linear for small signals in a defined frequency range but starts deviating from that whenever the audio input approaches frequency extremes or starts being too “strong”. The signal is passed through the two coils of the transformer, through the magnetic core, thanks to an electro-magnetic interaction between the geometry of the coils and the core. The core can saturate, though, when too much average energy is transmitted. This is a special kind of saturation, really different from the level saturation we are used to, e.g. with overdriven amplifier stages. It is strongly frequency-dependent and for this reason often unique and useful.

One of the main positive effects of this style of saturation is to add harmonics to the lowest frequencies. This addition means they become a lot more audible, because, for psycho-acoustic reasons, we relate the step of the harmonics to their fundamental, even when it is not audible. More transformer saturation, more presence for low range on small systems. It also adds sustain without compromising the original dynamics.

A complete model of a transformer includes its effect on the driving stage (input coil), because when it starts saturating something is reflected to that side, too. The main effect is a reduction of the impedance seen from the driver, with all the possible effects on its output.

Design of transformers and materials used for their construction changed a lot with time. While more modern units are more linear and behave better in a hi-fi sense, they saturate less gracefully. Older units are less linear (they have some kind of effect on all levels and frequencies) but saturate in a more musical way. Different styles for different uses. Instead of talking about Physics and complex parameters, we grouped and interpolated lots of models under a single control: “Shape”.  You can think of that conrl like going from “Vintage” to “Modern” materials and design, from smoother but less transparent to cleaner but with a stronger break-up and more harmonics.

One of the main design requisites for an audio transformer is its passing frequency band. The higher the starting frequency, the higher the frequencies that will be distorted with saturation. We exposed this parameter as it is a great control on the timbre and frequency range of the effect.

BAND: sets the starting frequency of the design. The higher, the less low frequencies will be affected by the saturation and will pass through. Useful for strong saturation on midrange.

STRESS: This is a gain stage before the input to the transformer. Increase it for easier saturation. Keep saturation low for a classic “vintage devices” subtle effect (that is highly cumulative, though), increase it for a blatant effect (corresponding to a blatant abuse of the device, nothing found in normal use of a device). We added a range menu under this knob. Set it to Bass if you are trying to affect the lowest frequency range, to midrange if you are looking for some saturation on mids. The menu makes the range more comfortable for the specific use.

SHAPE: We simplified all the stuff related to the design of the transformers behind this control. Material of the core, shape, design. Just move it from 0 (“Vintage”) to 10 (“Modern”) to choose the sound. It affects saturation and dynamics.

Z-Drop: When moved from its zero position, it engages the optional input drive stage. This stage is affected by the strong change of transformers’ input impedance when the core saturated. You can think of this control and Shape as “colors”.

Needle meters: these show the input level. They are not directly related to the saturation meters, as the Stress control is a gain stage between them and the transformer.

Core saturation meters: these show the actual saturation of the cores. Move the Stress knob to make them hot. The Band control affects the saturation, of course, as the lowest frequencies not passing through are also the ones that have the most effect on core magnetisation.

Dry/Wet Mix: this is a smaple-accurate mix of the processed signal with the incoming signal. Useful, for example, to get back some lost frequency range or to fine tune the amount of desired effect.

Mid/Side Balance: this is a balance between these two alternative components of the stereo signal. Left and Right are encoded to Mid and Side, then balanced through the parameter. The neutral position is in the middle. Rotate CCW to get more “center” component, CW fopr more lateral image. This control is useful to fine tune the stereo image, becausethe independent effect of the transformers on the stereo signal can change the image, tipically adding a subtle widening effect and making things sound “bigger”.

Copy and Paste: these are for copying and pasting the overall settings as a preset. They work through the clipboard, so you can, for example, copy a snapshot of everything from an instance and paste it to another one. Quick and simple. You can also copy and paste the content to a forum post: the preset is in clear text. An easy way of sharing presets online. Copy the whole text from the post and hit paste on the instance.

Load and Save: these load and save single presets from the hard disk, still using the same clear text.