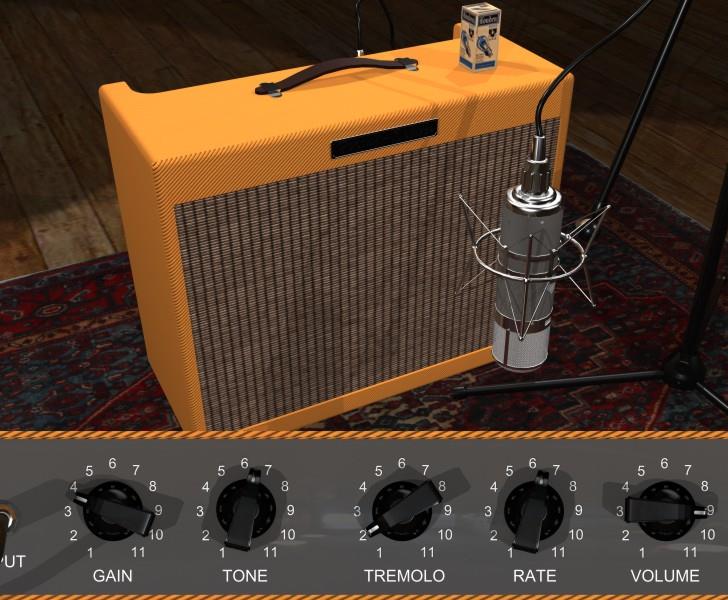 Deluxe1 is a carefully crafted model of a classic. One of the simplest but, probably, most interesting tube amplifiers for guitar.

All the circuits, from the guitar pickup to preamplifier and power styages to output transformer and speaker are modeled at the deepest possible level, modeling each single component on the actual schematics, for a real feeling of a tube amplifier.

Several options are available, from the style of guitar pickup (strongly affects the response to player’s touch), to model and position of the tracking microphones.

The design of the Deluxe amplifier contains an interesting quirk used on some customisations to get an unique control on the saturation. The second channel gain control, when the input is not used, acts on the internal (between preamplifier and power stage) level of the signal. When controlled, affects the saturation in an unique way that cannot be obtained simply by the guitar’s volume control or by the amp’s knob.

We reproduced this customisation, that is available through MIDI control change n.11 (“Expression”). Connect a MIDI controller (possibly an expression pedal), configure it to send CC#11 and get realtime control on the saturation like with a custom version of the Deluxe.

Here is an example where the pedal is used for realtime control on both the background and the lead guitar:

In this example the amplifier is used for some relaxed playing with slight overdrive on the first half and quite distorted in the second part (by the “2nd channel” trick with the pedal):

A song arranged using only Deluxe1 for guitar amps (Verbtone on reverbs, hardware pedal for extra distortion, to test the interaction between hardware pedals and Deluxe1):

The cone and the cabinet are dynamically modeled to get a realistic response. Physical modeling of the cone and its movement respond to touch with a natural feeling.

The Tremolo has a beautiful, realistic sound thanks to its faithful model, as a tube oscillator that controls the supply voltage to the last tube stage. Its complete model gives that natural effect which includes pushing the final stage to overdrive with Tremolo Speed settings.

Deluxe1 is a model in our new “Retube” series, a virtual custom-shop that includes detailed models for pickups- cones, transformers, sets of tubes amd whatever can affect the overall sound of the amplifiers.