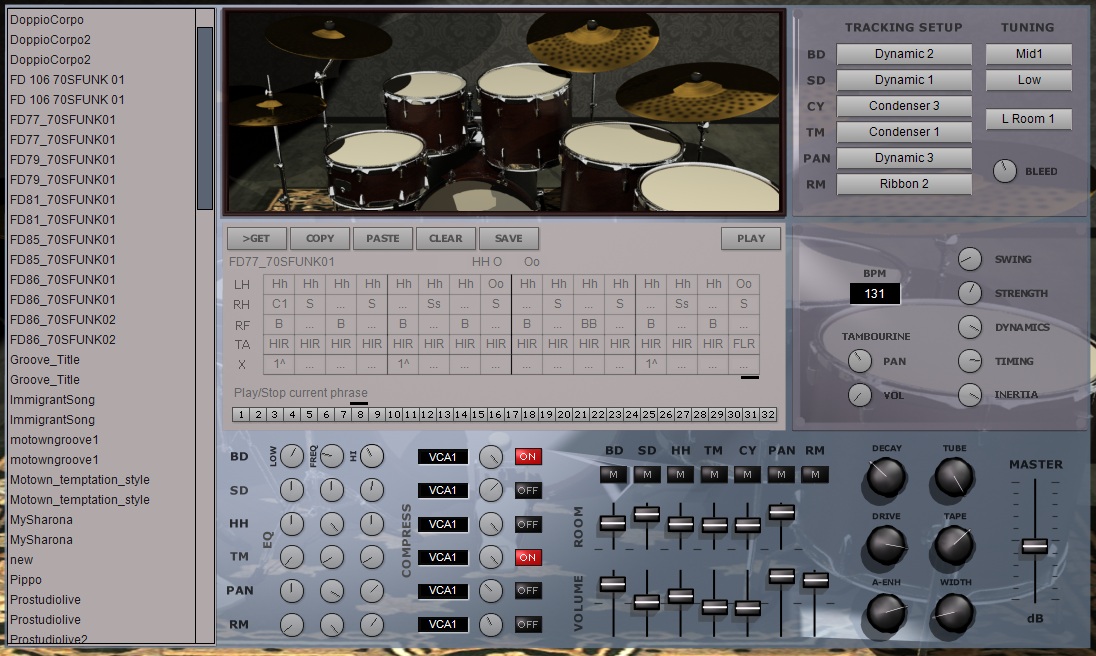 “Natural Drumsets” is our new line of drum kits with a virtual drummer and a set of microphones, effects and rooms.

“MotorTown” is the first plugin in this line, built around a custom mahogany kit.

This new v.1.1.0 in NOT backward compatible. You can open old projects, write down settings, replace the plugin, open the old projects and reload MotorTown.

A Phrase includes up to five lines. Left and right hands (Snare, HiHat, Toms, Cymbals), Right foot (Bassdrum) (left foot is implicit in HiHat programming), Tambourine (an extra with this kit, couldn’t do without it for a “Motown” style set), Extra words (help to add details to the performance).

The concept is simple: write a performance by defining Phrases on the sequencer, add details, set performance macro-parameters (like “Swing”), call entire phrases by sending MIDI notes to the plugin.

So, it is a bit different from usual: no MIDI sequences. MIDI is used to trigger Phrases. A Whole song is contained in a Groove (the set of up to 32 Phrases).

This on-board programming makes it simpler and faster (once you master the simple set of Words) and lets us control the performance without having to set details for every single hit. the result is a more natural performance.

The drumset is sampled specifically for this concept, so many more touches are added. We don’t have to care about them, though.

Six big buttons on top of the center (sequencer) section are available to manage Grooves and Phrases.

To load a Groove from disk:

To save a Groove on disk:

To Copy and Paste a whole Phrase:

To Clear a Whole Phrase:

To Listen to the whole phrase, in a loop:

Active Phrase can be modified or switched to a new one while playing but the transition won’t be smooth in this Play mode.

A small slider is available under the lower line (“X”). It sets the length of the phrase. You can insert words in the whole length (up to 16 Words in a line) but the Phrase will play only up to the length set by this slider.

Active Phrase is selected by the lower line of 32 slots.

The sequencer has lines referred to 4/4 division but they are just a graphical reference.

First two (top) rows, left and right hand, are programmed through the instrument and word menus (top-center in the sequencer area):

The same Word for bot hands at the same time will be played as “flam” (two hits with both hands on the same piece, slightly shifted in time).

Third and fourth rows (Bass drum and Tambourine) are programmed differently: simply select a Word from the drop-down menus contained in the slots.

Fifth row is programmed like the last ones. It contains “performance” Words and can be used to add detail to the performance.

Each Word contains from one to four characters.

“…” is a special Word which indicates an empty slot (silence or no action).

For the Tambourine, four letters are used. A “F” means it is being played Free (no hit on a palm). A “H” means it is being played with a hit. “L” and “R” indicate Left and Right movements. Capital letter: a palm bein hit on that side. Small letter: free movement on that side. Example: HRl is a hit on Right palm followed by a free movement on the left.

MotorTown includes a section relative to the tracking phase (top-right). Sampling, kit tuning and muffling, microphone modeling, room modeling, let us set the tracking situation to get good control on the overall sound.

Bleed control adds bleeding among microphones, from complete separation to strong cross-talking. Once you have fine tuned your kit and tracking system, adding a bit of Bleed merges the overall sound nicely.

Six tuning/muffling options are available for the Snare drum. The Snare was sampled at three different tunings, times two modes: free and “wallet”. Wallet mode stops the head for a drier and punchier sound.

Six tuning/mic’ing options are available for the Bass drum. Two mic positions (in front of the front head, in the front hole) times three tunings.

The Mixer section needs a bit of attention to be fully understood. There is a set of sven “level” faders (bottom) and a set of six send faders (top of the faders section).

Note: check for the “Bleed” knob to be fully CCW (no bleeding) while testing.

Similarly, the first “Mute” buttons on the left (above faders), mute the instrument, not just its channel. A muted instrument won’t be heard in the Pan channel.

The sixth fader from the left (Pan) is a volume control.

Send faders set the amount of signal send from each channel to the room. You can control how the room sounds by selecting the microphone used for getting the diffused sound back to the mixer (Tracking section, top-right).

Equalizers and several models of compressors are available for every channel.

EQs are semi-parametric. First knob is a cut/boost control, fixed frequency (neutral: 50%), for the low band. Second and third knob are frequency and gain (cut/boost with centered neutral position) for the mid/high band.

Compressors can be selected by the menus. Three models are available for each channel:

Simply a control is available for each compressor. It is a dry-wet mix and crossfade.

It is a special feature that affects the source of all the instruments in the kit. Rotate CCW (from its centered, neutral position) to make the dry sound drier or CW to add sustain, up to over-compressed. It is extremely useful to get a very dry sound as a starting point for the mix.

Saturates the stereo output. Can add brightness but is specially useful to control the overall synamic range. Look at a meter after the plugin to see its action when you cannot hear a strong difference.

Adds tape emulation to the master bus. Great for adding punch and warmth. Set it with care to get the best dynamic behaviour.

An old, famous trick to add enhancement to high frequencies. Increase it to compensate for high-frequency loss when using a lot of Tape.

Controls the overall stereo width at the output, with a special feature. Fully CCW is the original stereo image. Moving to the center mixes everything to mono. Beyond 50%, the stereo image becomes wide again but left and right sides are reversed. You can control the image of the drumset (drummer’s or listener’s perspective).

The last fader boosts or cuts the stereo signal before it is sent out.

Mid-right, the Performance section controls the behaviour of the drummer.

BPM field sets the velocity. Set it to the same value as projects tempo setting to get the Phrases synchronized to the song.

When duplets (couples of half-beat hits, like “Ss”) are programmed in the Phrase, this control shifts the first hit to the first third of a triplet, and anywhere in-between. Increase Swing to give a a different feeling to the rhythm and make it fit the song.

Everything about hit strength above (full notes, ghosts, variations) is relative to an absolute Strength parameter. Use this control to set the general strength the drummer is using. It is not just volume, it affects everything including the timbre.

NOTE: Strength has a normalized “1” ceiling. When it is set to full CW variations like accents may loose all their weight.

Everything about Strength above is also affected by the overall Dynamics setting. For example, a “Ss” Word which includes a full hit and a ghost note on the Snare, sounds “SS” (two full hits) if Dynamics is set to zero.

This parameters defines how precisely the drummer follows the metronome. CCW is a bit slower, CW is a bit faster. The drummer Always gets back on time, though, so you don’t loose the alignment to the song.

Inertia takes into account the weight and distance. For example, playing the HiHat on the left and immediately after that the last floor Tom on the extreme right with the same hand sets a limit in terms of timing and strength. Increase it to get a more natural performance.

MotorTown has two inputs and several couples of outputs.

USING MOTORTOWN IN A SONG