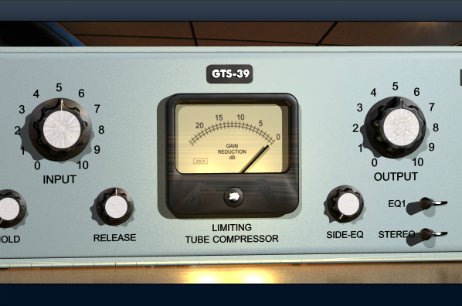 In this tutorial we’re going to beef up a drum track with some serious compression. It’s a pretty old-school Drum’n’Bass-type loop, which might have a somewhat raw and unpolished sound, but also lots of character to it. Hence, the GTS-39 compressor plugin surely is the right choice for this job: modeled after an old limiting tube compressor, the GTS-39 has a unique sound all to its own, that will complement our drums perfectly. Before we get to work, let’s have a listen to the unprocessed song first:

Despite its powerful tone shaping capabilities, the GTS-39 is very easy to use: there’s no neither a threshold- nor an attack-control that we have to deal with. All we have to do is to place the plugin on the drum track and turn up the INPUT-knob until we get the desired amount of gain reduction (in our case -5 to -10dB, indicated by the VU-meter in the middle). However, since the plugin actually doesn’t lower the overall level when compression sets in, as you would expect from many other compressors, but raises it, we have to turn down the OUTPUT-knob so that the input level matches the output level.

Next we set up the side chain control (SIDE-EQ). When the knob is turned all the way to the right it acts similar to a high pass filter. This is important, because the kick drum would otherwise mess up the compression due to its very low and loud frequency content. After activating 8x-oversampling in the drop down menu in the lower left corner of the interface, we turn the RELEASE-control all the way up (i.e. to the right). This is actually the fastest release setting, which is a good choice when working with transient-heavy material (like drums).

Now it’s time to go back to our track. Here’s the same drum loop with only GTS-39 engaged as a further treatment:

The compression really brought all the different elements – kick, snare, hats, etc. – closer together and also added a lot more body and sustain to the single hits. Mission accomplished!

You can download the preset for GTS-39 here: GTS-39 DnB Drums Preset.FXP