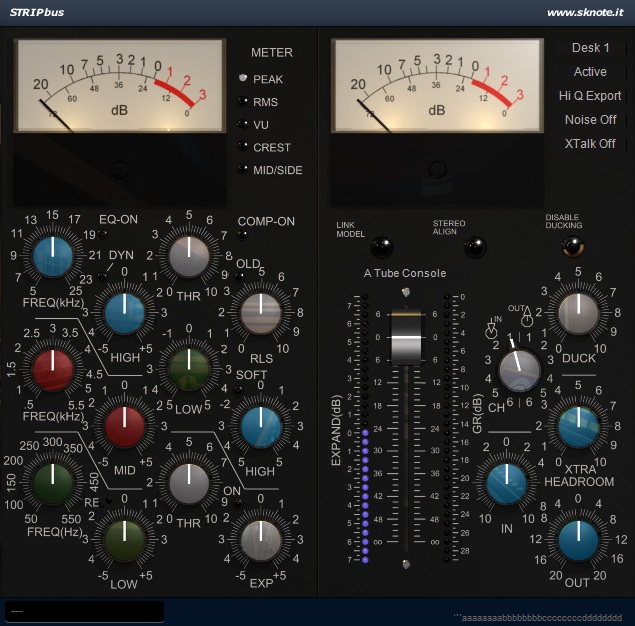 Strip is a console modeling effect and a channel strip with several unique features.

Several models are available. Each model contains different features and is designed by analyzing vintage and modern channels.

An unique feature of Strip is how a whole model is managed. All the instances assigned to the same “Desk” menu item interact in background. Audio passing through an instance can actually have effect on the other instances. When the mix is too hot the whole overall model could be overloaded. Increase “Extra Headroom” value to get back more headroom and clarity. The control is shared, by moving the knob on a single instance it is moved on all the Desk.

Another unique feature is its set of six Ducking busses. Select one out bus by the Ducking knob on the master instance, select the same one as input on the slave instance, increase Duck knob value on both (the same knob is action on a master and sensitivitynon a slave).

Being the console an overall model, audio can pass in small amounts from a channel to other ones in the same Desk. Select the amount of crosstalk from the menu. You ould be able to hear a bit of sound from a channel coming out from another one. It is quite useful to add “glue” to a mix. Crosstalk can be sample-aligned. “Ali” menu items activate aligned modes. Depending on the host, you need to stop and start the song or bypass and activate the instance to report the alignment delay to the host.

Several levels of background noise are available. Sometimes it is useful because adds a kind of “dithering” effect, adding detail and smoothing the overall sound.

The meters have several options available. They generally show the straight value. Only exception is the VU mode, which is calibrated to show 0 dBVU with an incoming 1 kHz tone. Meters are connected internally, to show the internal working level of the channel. This is useful to manage the amount of saturation happening. Peak mode has fast attack and 100ms release. RMS have 100 ms time constant. VU mode has 300 ms time constant and is calibrated as described above. Crest mode shows the dB difference between Peak and RMS modes; it is a measure of the amount of dynamics. Mid/Side mode show peak values for Mid and Side components of a stereo signal, actually sum and difference of the channels.

The Equalizer is designed as a “balancing EQ”. The idea is to apply all kinds of correction and sound sculpting to the signal before it goes into Strip. Then, use Strip’s EQ to balance brightness, presence and low range weight in the mix. When Dyn mode is engaged the gain for each band depends on the incoming signal. Generally makes the effect more transparent. A good idea is to set the EQ while in static mode (to make it stronger and get better feedback in the effect) then switch to Dyn. The Re switch activates a resinance in the lower band: a small dip is added when boosting and a small peak when cutting. The low band has a dual configuration: a peak when boosting, a hi-pass when cutting.

The Compressor is multi-mode. Has a rather slow attack and a release set by the control, to give “snap”. When “Smooth” is engaged, it changes to fat attack and big knee; more transparent, no added “snap”, very useful on vocals, acoustics, bass. “Old” mode replaces the sidechain network; could sound smoother on some sources. Two sidechain filters are available, with cut and boost action. Increasing a value increases compression sensitivity to that frequency band; the opposite when cutting.

The expander is bi-directional. A positive setting makes it work as an upward compressor: signal below a threshold is boosted. The opposite for negative values: it works as a gate and signal below the threshold is attenuated. Positive mode adds sustain and presence. Negative mode polishes the signal or reduces ambience.

Input gain knob is compensated for. A change in input gain activates the opposite gain at the output. Oveall level is generally almost unchanged bur internal working level is changed, as shown by the meters. Decrease gain tonget back more dynamics, increase gain for more saturation.

Output volume knob is useful to compensate processing to get the same output level as for dry signal, e.g. when compressing.

The fader is a gain control placed as the last step. Useful for automation.

Three big buttons are available above the fader.

“Stereo Align” engages a symmetrical saturation mode: Left and Right channels are “ideal”, with exactly the same effect (no analog counterpart). Can be useful to keep the stereo image of some stereo sources, mainly with strong saturation.

Disable Ducking disables the effect of duckingnon all the instances (not just a Desk) at the same time. Useful tonevaluate the effect of a complex network of ducking in a mix.