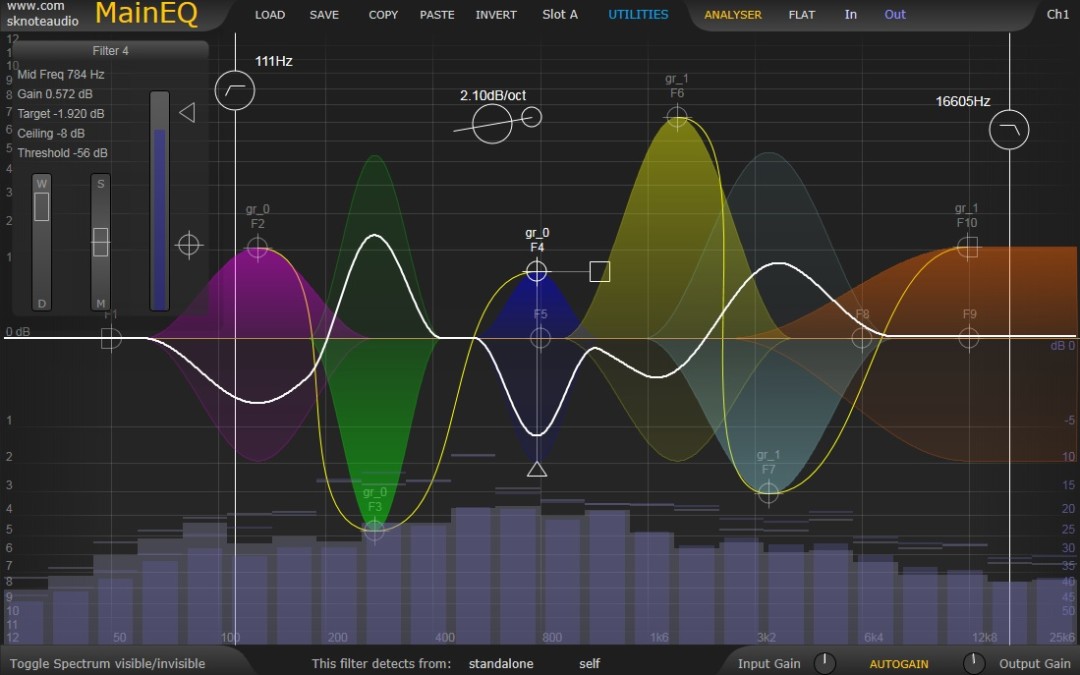 Get the preset pack here

As a tutorial, a short description of the choices behind every preset. 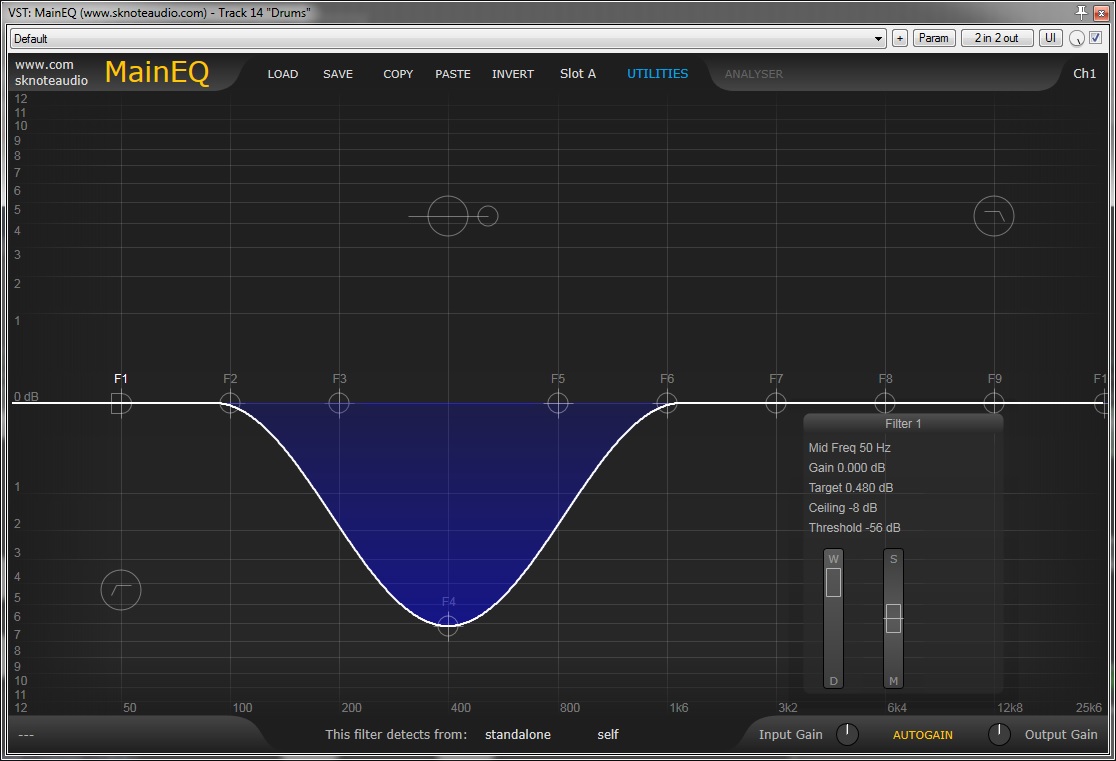 400Hz region often means “Mud”. Cutting that band usually removes too much weight from the track.

In this preset the band is set to be cut on low levels and normal on higher levels. Low levels get mud removed while transients keep their body.

Filter 4 has a negative base gain and a neutral target gain. It is driven by its own band’s level. When it detects a transient, goes to neutral. When the level through it goes down, it cuts out the mud. 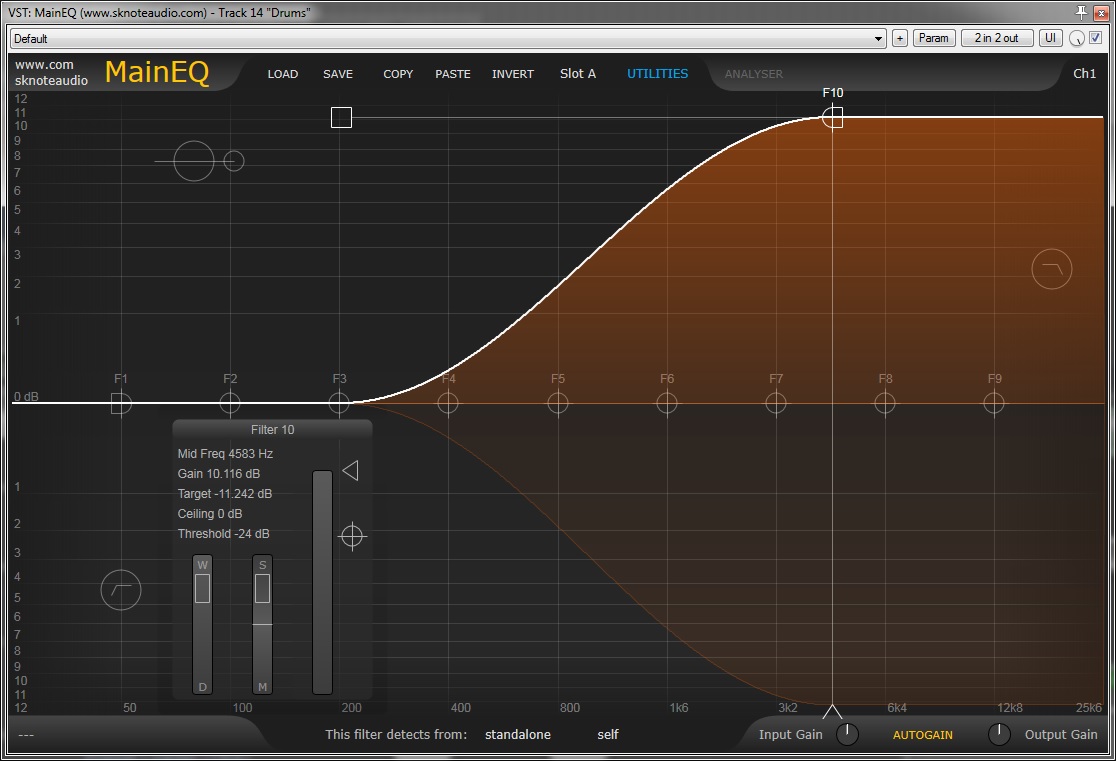 A static boost on the stereo signal uis usually too blatant and can introduce harshness.

In this preset we used the Mid/Side feature to add a big boost to the highest frequency range but only on the Side component of the stereo signal. We also made it dynamic, with a huge boost as a starting point, going down to a target cut when levels go higher. Levels are set to have the overall curve always moving, more in the boost range.

Use the Input Gain knob to set this, it is compensated and its net effect is just to set internal working levels (could be called “sensitivity”). 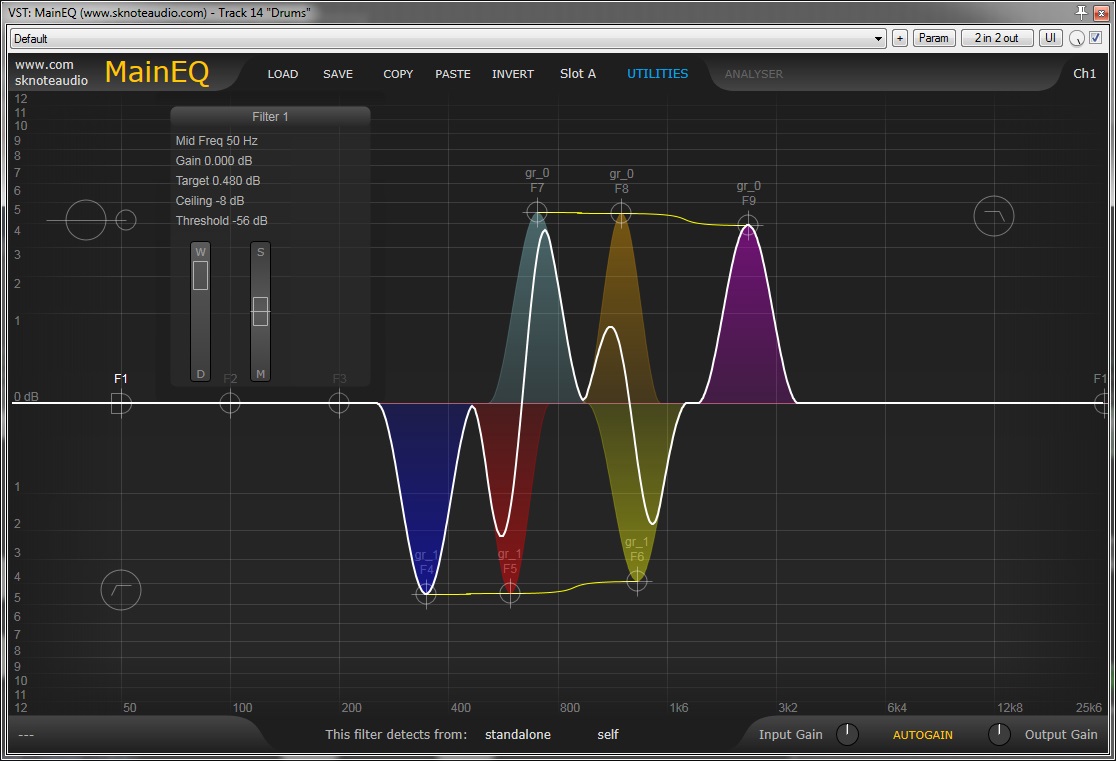 There is a psycho-acoustic effect coming from shifting the “formants” of an audio signal. Make simple, flattening the spectrum and moving the original shape elsewheregives a strong effect of pitch-shifting, which on drums is more like re-tuning the drums.

Here we used three filters to cut the original shape out (they are cutting, in the image). To set them: 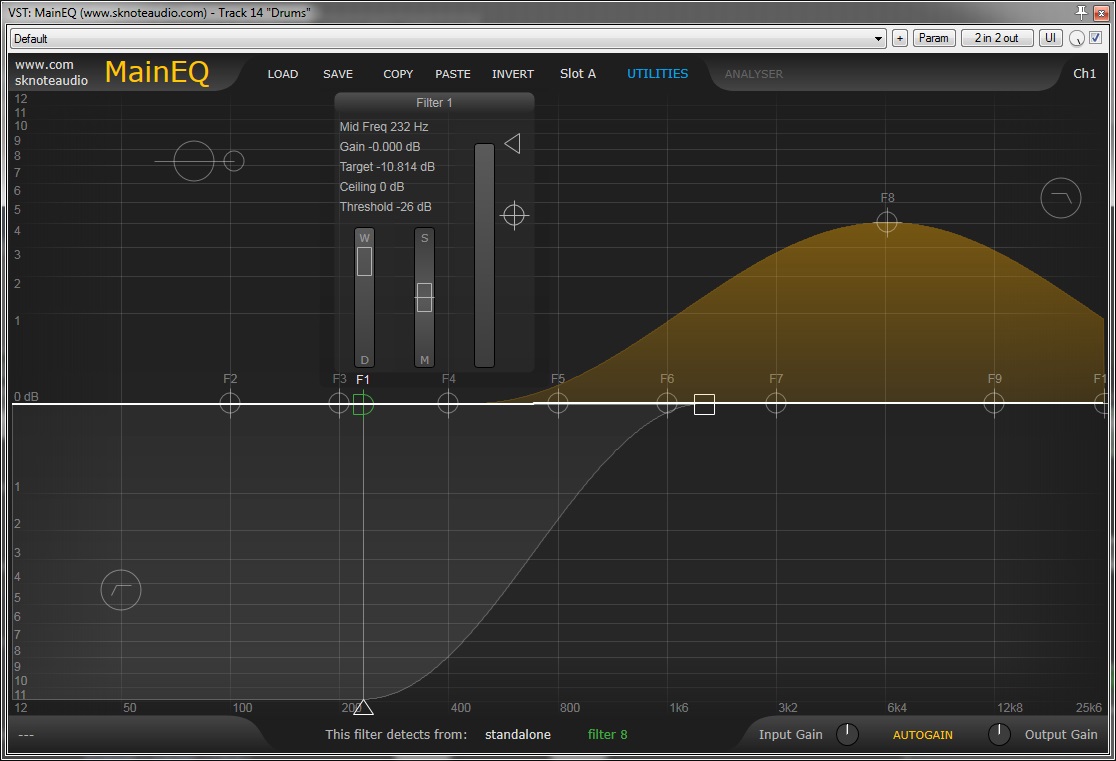 In this preset we set a filter as a pure detector (on the right, note how it is not affecting the overall curve because its filtering action is switched off by its square handle).

Another filter, on the left, uses the inter-band control of MainEQ, being set to receive the control level from the first filter (Filter 8, which is set to detect through its own band).

The higher the control from Filter 8, the lower the low content. Low range leaves space to hghj frequency transients, then go back on sustain and tails. 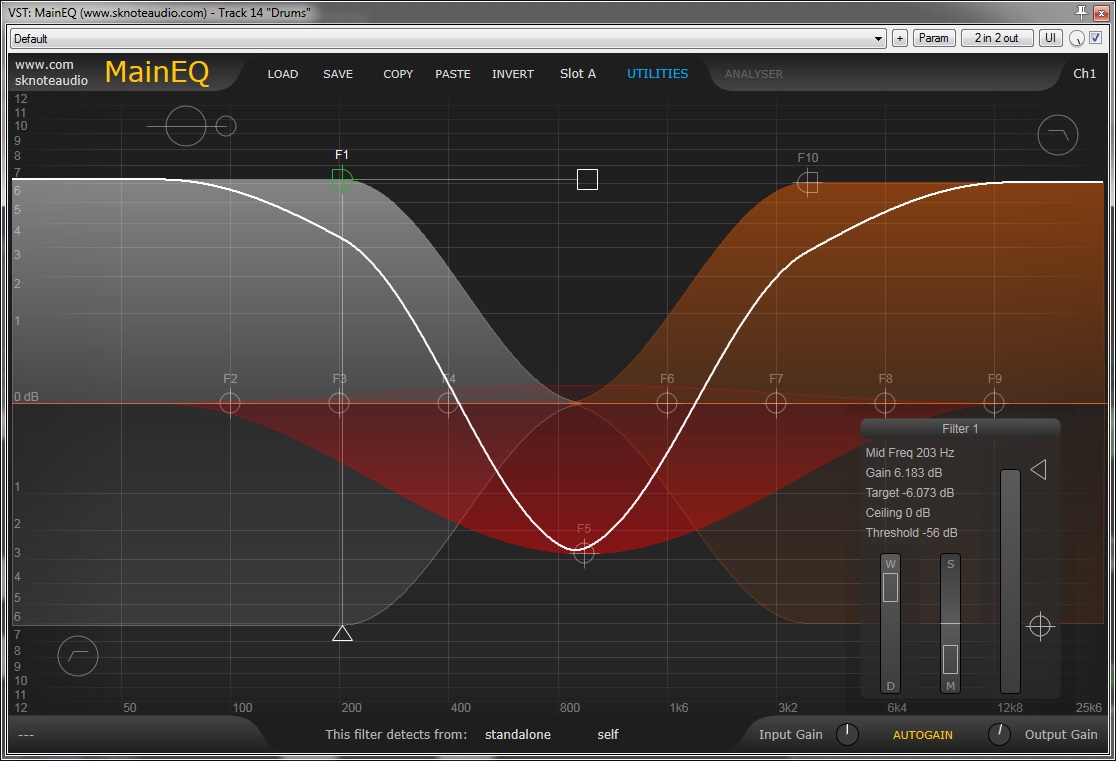 This is a three-bands mastering preset. Low and high frequency ranges are set to be stronger on transients and neutral on sutain and tails.

Midrange is set to be neutral on higher levels, down on lower levels, to keep presence but leave a “Loudness” smile otherwise. 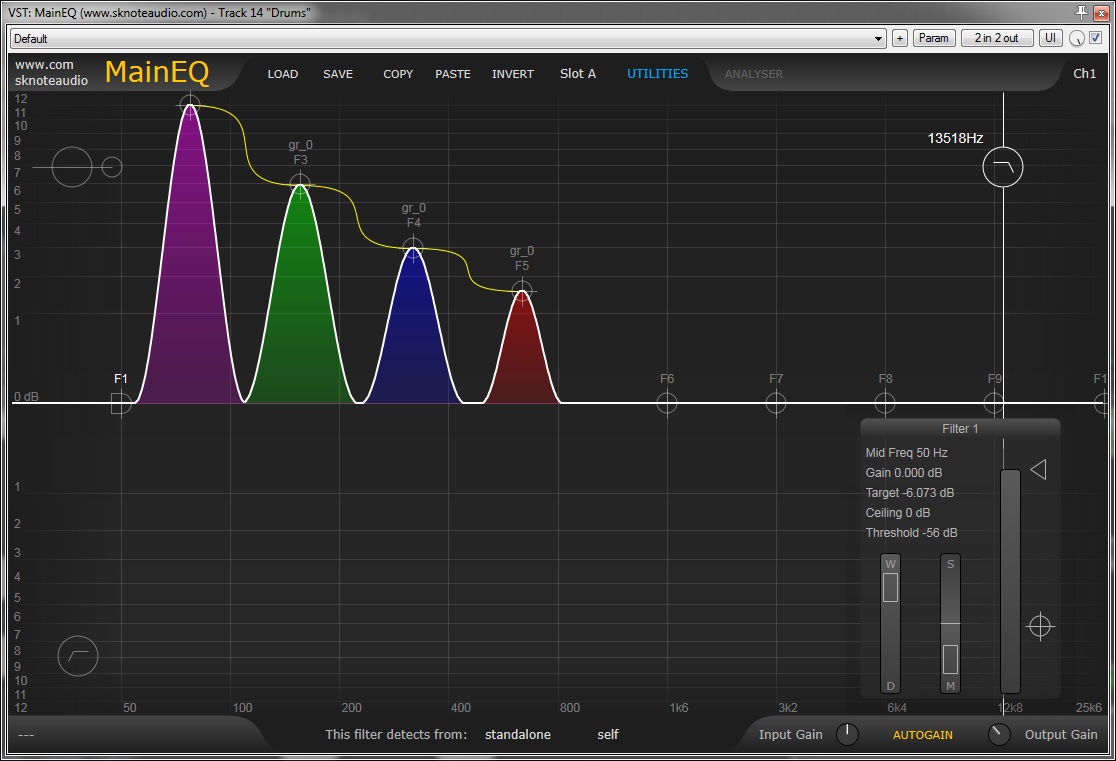 This is a special filter which takes advantage from Polys. Four filters are set to decreasing gains and 1 octave frequency steps. Boosts and cuts happen on the fundamental and on relevant harmonics. Try it on bassdrum, setting the main filter on the lowest main component of the drum. 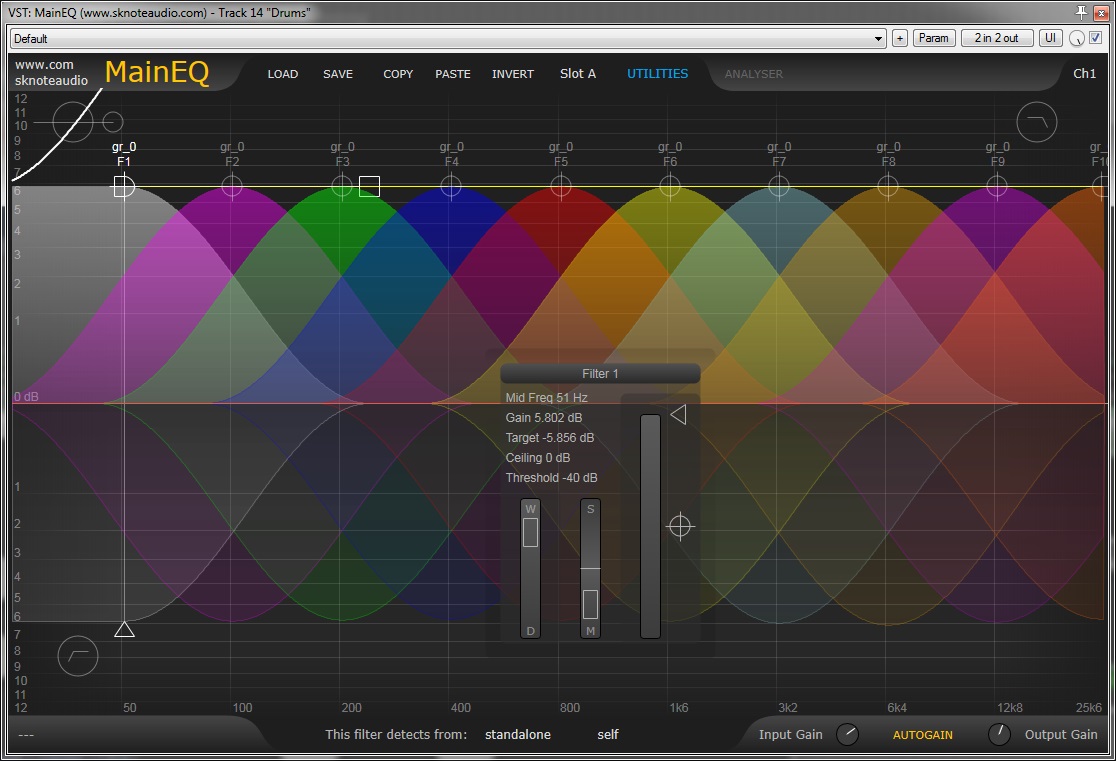 This preset sets a very special multiband compressor. All the bands are engaged, constant spacing, same settings, each one reacting to its own frequency band.

Use the Input Gain control to set it so that the overall curve keeps moving around the center (neutral). YOu can get beautiful multi-compression with this magic preset.

Hear it in action here: 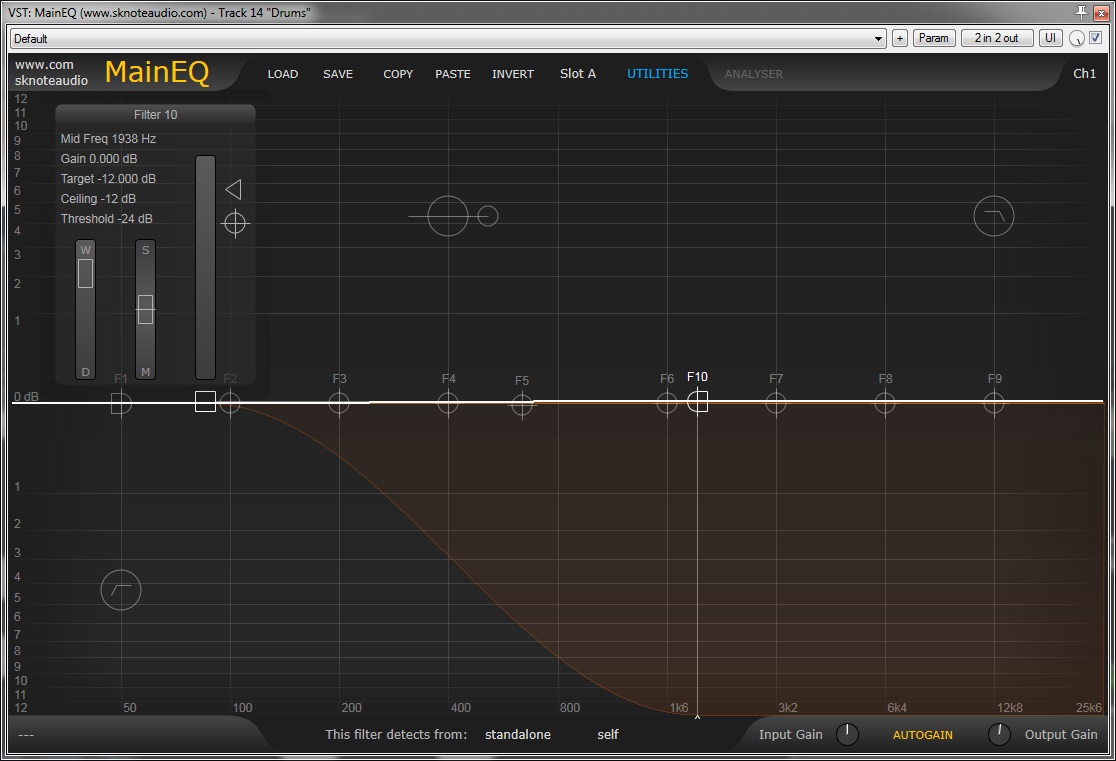 We always have that “Tape” sound in mind. This preset uses a particular setting to get that warmifying effect. A filter is set to a broad cut on high frequencies, reacting to its own incoming level. Threshold and Ceiling settings are key to this effect: they are set to a level range exactly the same as the programmed filter cut. When the level reaches a threshold, it cannot go beyond that. Warmifying effect, a ceiling to the content of high frequencies. Change filter’s frequency to choose how strong the effect is.

Use Input Gain instead of changing threshold and ceiling, to set the overall sensitivity of the effect.