MainEQ – In a mix (compressing and making room for vocals) 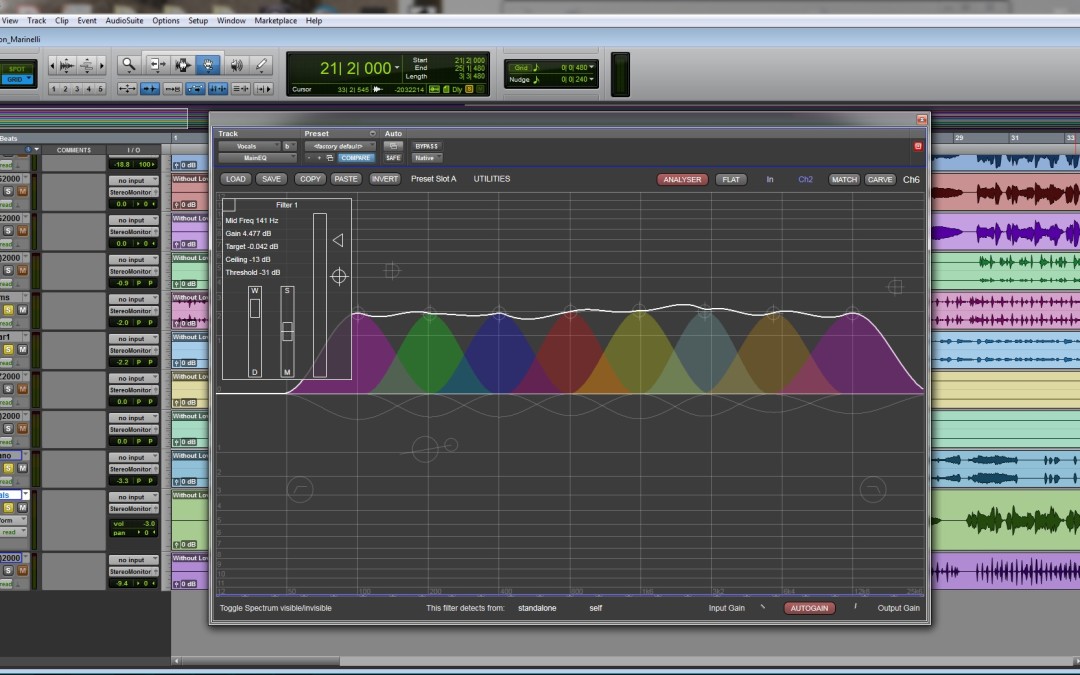 MainEQ is a parametric equaliser but also a dynamic EQ with some special features: inter-band and inter-track dynamics, Mid/Side continuous fading of its action and more.

In this tutorial we use several instances in a full mix, to show a few of its most peculiar uses.

Following the sequence in the video, the first instance (registered as Channel 6) is on mono vocals. This is the only instance that is used independently as an effect on its own track but it also acts as a ducking “master” channel (as shown below).

On its own track, it is set to have all the peaking filters spread on the frequency spectrum, in dynamic mode, “self” detector mode. Every band in MainEQ (a resonant low-shelf, eight peaking and an high-shelf resonant filter are available) acts independently to tame its own frequency range, for a frequency-dependent compressing action. The net result is to tame peaks and compress low levels and keep the vocals full and clear.

The yellow peaking filter is shown with an exaggerated gain in the image above. The gain moves from the static setting (the circle) to its dynamic target (the triangle) as the detected level (coming from the same filter in this example) moves above the threshold (the circle in the “Filter 6” small window) up to the dynamic ceiling (the triangle in the small window).

This is not a multiband compressor, as, like in common parametric equalisers, the filters are placed in series, so there is no freqency splitting/mixing.

This istance (Channel 6) acts as a master ducking source, too, because in this example we are aiming to make room for vocals in the mix.

The successive instance is on Electric Piano. 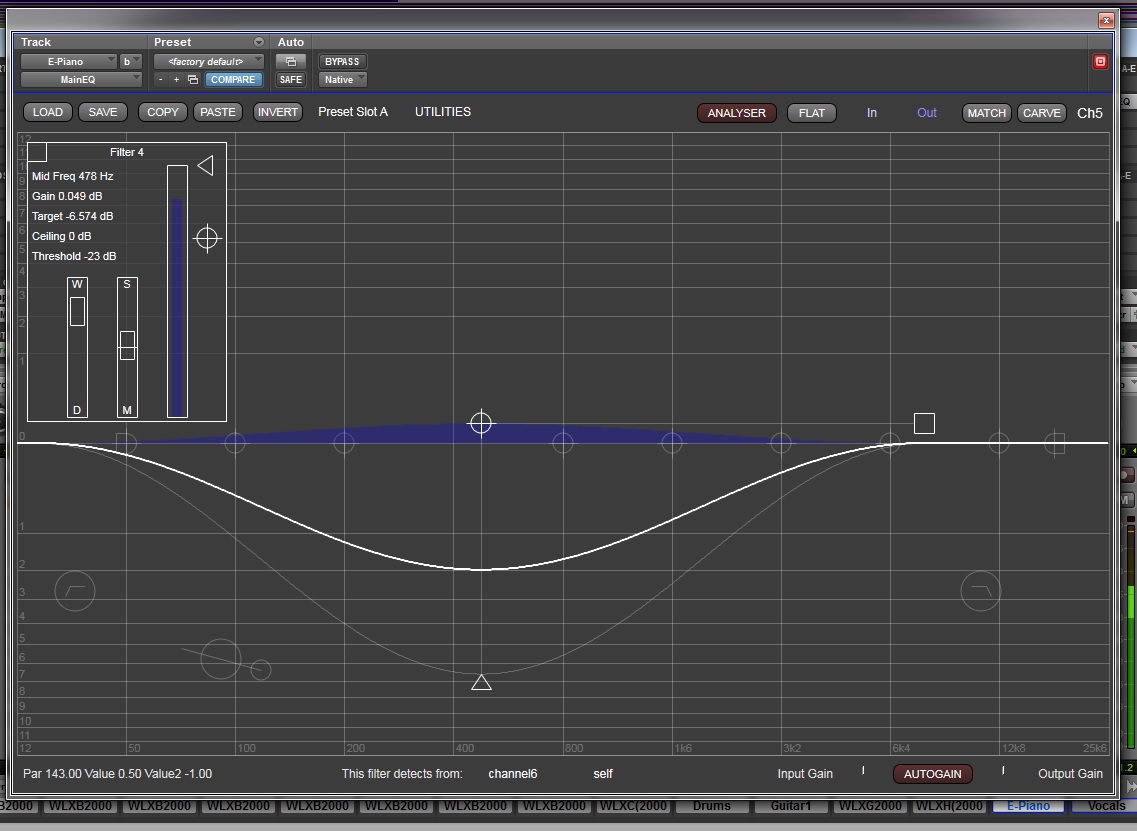 Filter 4 is set as dynamic, placed to a frequency range by ear, and set to react to the level coming from Channel 6 (vocals, the ducking-master above). As received level increases, this band is ducked to make room for vocals (band’s position, width and target gain are set by ear). As vocals fade away, the action of the equaliser is gradually disabled to make the ducking dynamic and as few explicit as possible.

The same treatment is applied to other tracks. The only real difference is on stereo drums. 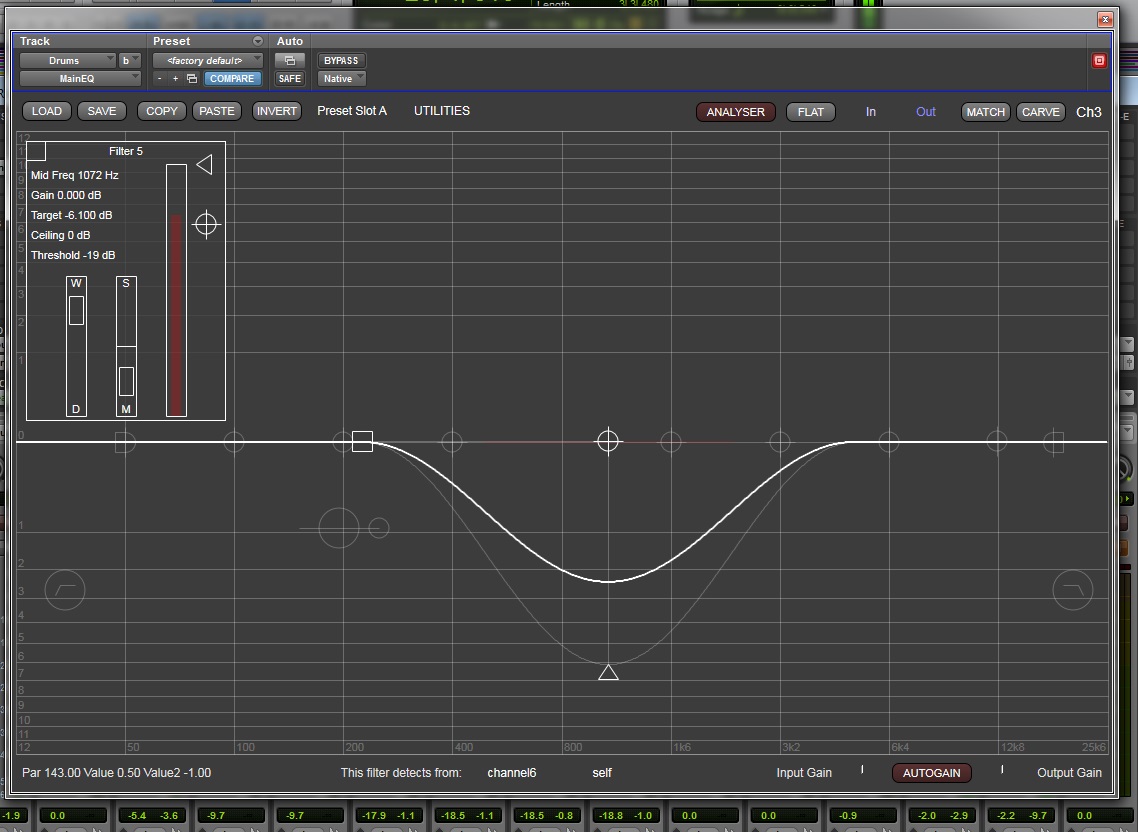 One of the special features of MainEQ is the possibility to fade the action of the EQ from normal to Mid or Side components of the stereo (where applicable) source. On drums, we set the dynamic filter (again, controlled by vocals tracks as a ducking master) to act more on the Mid and less on the Side component of the stereo signal (Mid is ducked more than Side, that is preserved). In the video you can hear a comparison. Setting it more on Mid adds space while keeping a fuller spectrum on sides even while the vocals come in. In the image above you can see how the M/S slider (in the small filter’s window) is set closer to M (Mid).