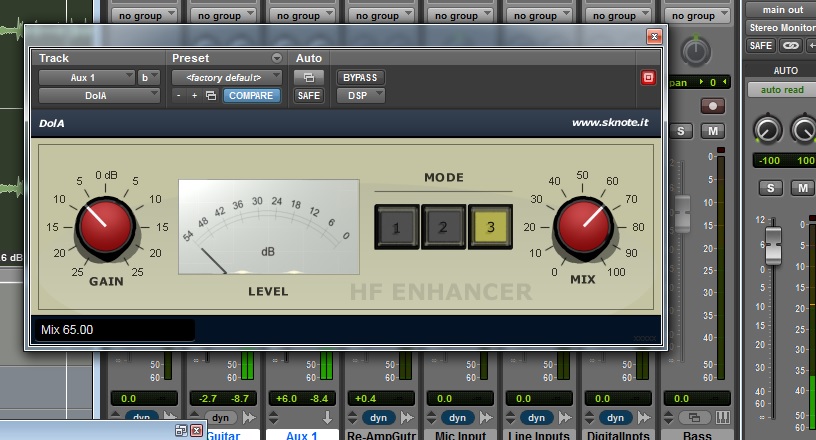 DolA is an extremely simple processor, apparently, it requires a good understanding of what is happening for the best results, though.

It is based on a vintage trick: a noise reduction processor, used in its “encoding” or “rec” mode, is used as enhancer to open the sound of a track, mix or master. The result is interesting because the processor operates on frequency bands, independently but with two partially overlapping bands, and can provide an extremely transparent action if well set up. Originally, the effect wasn’t designed to be heard but required the complimentary effect in the listening system, to (almost) null it with the net result of an increased signal/noise ratio.

The effect is a combination of multiband processing, limited compression (compression with a limit to the action of the gain reduction amplifier), limiting, saturation. Simplifying, the net result is to bring up a dynamic region of a frequency band, dinamically. Being a combination of non linear effects the input level defined the behaviour of the system. Gain staging is actually a parameter for this effect.

DolA makes it extremely simple with its input Gain knob. It is compensated at the output, to avoid level changes, and is internally patched in reverse. The reason is that with this routing it can be used like a “processed average level” control. Increase Gain to move the effected dynamic range up. Decrease it to move the effected range down.

The Gain setting is very important to make the best use of the effect: almost (apparently) inaudible but missing once bypassed. The main feeling is like removing a blanket from the speakers.

These are a few rules of thumb for a fast start-up.

The Mix knob adds effect to the dry source. It goes to 200% effect, though, so you can still use it as a send effect. Actually this is an interesting subject.

There are three possible uses of DolA: insert on a track, insert on a group, send. Being it a non-linear effect (more than that, a parallel-series combination of non linear effects) everything changes depending on the position in the chain. These are a few ideas about possible placement and different results.

The best one? 1 when an instrument needs “life”, 2 on multitracks like a drums group, 3 to open a submix, 4 to refine an almost perfect balance.