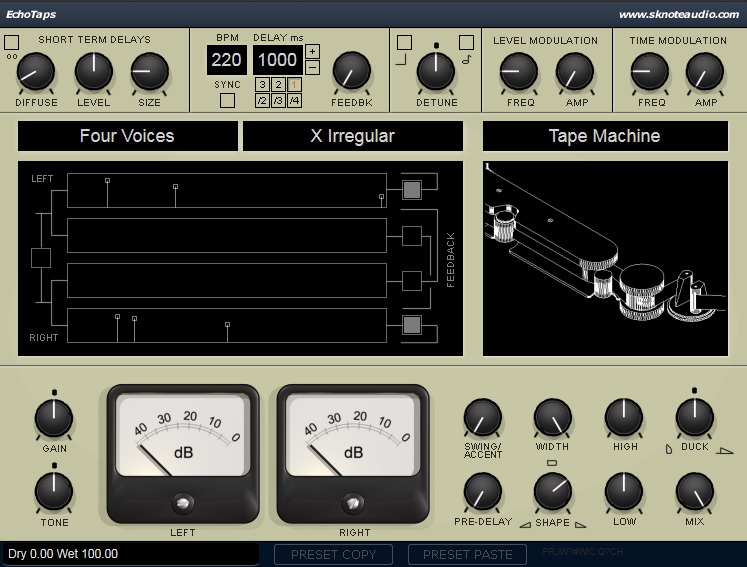 EchoTaps is a multi-mode delay.

Includes several sound models to cover the history of delay effects and provide a wide palette of effects.

EchoTaps is built around two sections:

Both sections include several configuration, which can be selected independently by two menus.

A third menu sets the overall sound qualities of the effect. It includes all the main options:

It makes several configurations of echoes available. The single tap is useful for all classic echo configurations. Other options are useful for rhytmic effects and special control, thanks to accent and swing parameters.

Reflections section also includes several configurations. The single reflection is useful for simple delay effects. Other ones are useful for ambience, pitch shifting, chorus and other modulation effects.

Note how the last echo (right, on the graph) is the one that has the duration set by the text control. So, for example, if a single echo is selected with 1000 ms delay time, switching to a duplet sets the first echo at 500 ms and the second one at 1000 ms.

A delay structure graph shows the configuration of (long term) delay lines and the overall topology. There are four delay lines, for mono, stereo or true stereo (four channels) effects. Top to bottom, they are:

So the first and last lines are straight, second and third are cross-connection lines.

Multiple delay configurations are controlled by a few important parameters.

Sets the duration of the longest echo in the configuration.

It is combined with the BPM text field and a set of buttons. BPM text field should be manually set to the same value as the active project. Once set, timing buttons automatically set echo length to a fraction or multiple of the musical interval.

This control sets the level of signal going back from the output of the delay to the input, according to the configuration selected by the four feedback routing buttons on the graph.

Different from the feedback filters, this filter is placed before the input to the delay lines. It affects the overall effect color. Has a double action:

This knob has two possible actions.:

When a duplet is selected, it has a “swing” action on the position of the echoes. The first echo is delayed until (Swing full CW) the repeating duplets (if some feedback is active) are stretched to triplets with a missing second note (or anything in between).

With any other configuration of echoes, the Swing knob becomes a control for accent (an echo has a level higher than other echoes in the structure). When the knob is rotated from its zero position (full CCW) single echoes are selected for accent (the accented echo becomes red on the graph). The control is not snapped so the knob still also controls the amount of accent. Levels are normalized to one, so actually the accented echo is not boosted but all the other ones are attenuated. Slowly rotate the knob while looking at the delay graph to get a grasp on its action.

Pre-delay, in a delay effect, affects the rhytmic configuration. About 1000 ms of pre-delay are available.

Note: Shape and feedback should be manually fine-tuned when looking for a smooth echo decay.

When a confguration with multiple reflections is selected for the short term delays, this knob controls the volume of the reflections following the first one.

When a confguration with multiple reflections is selected for the short term delays, this knob scales the timing for all the delays after the first one, actually scaling the overall “ambience” model.

Several pitch shifting and modulation options are available. Their behavior changes depending on the configuration selected for the reflections.

Detune shifts the pitch of the reflections, generally in opposite directions. It is not a modulation, it is a true pitch shifting (no oscillation and zero-crossing). Includes a switch (right of the knob) to choose between fractional and chromatic (semitones) shift. The second option (left) places the pitch shifting stage at the input (the signal is shifted then repeated) or in the feedback chain (the signal is shifted again after each repetition).

Level modulation affects the reflections and echoes in various ways, depending on the combination of echoes and reflections. Useful to add movement.

Time modulation affects the pitch of the reflections but, differently from Detune, pitch shift is obtained by varying the timing of the reflections, so that a modulating and cross-zero effect is obtained. This effect depends on the configuration selected for the Reflections. When an overall configuration with many echoes or close reflections is set, this feature is extremely useful to mask artifacts and stationary frequency peaks or valleys (resonances, comb filtering).

OTHER PARAMETERS AND SPECIAL FUNCTIONS

This knob controls the stereo image at the output of the effect. CW: original (widest) stereo image. CCW: mixed to mono.

Cuts or boosts the incoming signal before the effect. Disabled in this version.

Mixes the output of the effect with the dry, input signal. In this current version there isn’t any dry signal added and it works as a simple output volume control.

In its neutral position (50%) the output from the effect is un-affected.

When rotated CCW, the ducking feature reduces the duration of the echoes with decereasing level at input. More input, more overimposed effect. The input stops, the tail gets shorter.

When rotated CW, the ducking feature “ducks” the effect with the incoming signal. Output level for the effect is reduced when signal is present at the input. The input starts, the effect goes down.

Just press “Preset Copy” on the interface, then right click and paste as text in a thread or text file. The preset is now exposed as readable text.

Select the whole text, right click “copy”, press “Preset Paste” on the interface and the preset is loaded.