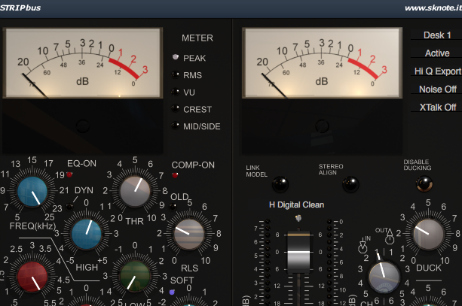 When Strip V3 arrived a couple of months ago it meant nothing less a major overhaul of the popular channel strip plugin, including a completely new designed framework, among many other things. It also came with some brand new console models. Unfortunately, there was one particular model, the ‘G Character’, which was not fully functional, especially on MacOS – until now, that is!

From now on, Mac users will find an updated version of Strip V3 in their user accounts; simply login to your user area at the Sknote Webshop, click on ‘My Software’ on the left, and choose your preferred plugin format to download the latest version to your computer. An update for Windows users is also on the way, and will be available very soon! It goes without saying that we dedicate today’s tutorial to the ‘G Character’ console in Strip V3.

Here’s the track we’re going to work on, a fast trash metal song. Listen closely to the guitars as they’re what we’ll be focusing on:

A Sound of Character

Although we have two different guitar tracks in our example song it’s actually only one part which has been recorded twice and then panned hard left and right respectively to achieve a big and wide sound. After creating a subgroup for the guitars we place an instance of Strip V3 on the bus. If we now choose the ‘G Character’ console from the drop down-menu above the Gain slider, you will notice a nice boost in the lower midrange right out of the box, which eventually lends more weight and body to the guitars.

Let’s turn to the EQ section. Before it starts to do anything we have to activate it by clicking the button next to the high FREQ-knob (‘EQ-ON’). There’s a fair amount of low end rumble in the guitars which we don’t really need. So we set the green FREQ-knob at the bottom left of the interface to 300Hz, and turn the LOW-gain-knob next to it all the way down. You might think that 300Hz might be a rather extreme choice, but bear in mind that we’re not dealing with a steep low-cut filter here. In fact, the lower EQ-band works quite gently and will only roll off some of the very low bass frequencies.

In order to give the guitars a little bit more bite and presence in the mix we’re going to boost the upper midrange: after setting the red FREQ-control to 5.5kHz we turn up the MID gain to about two o’clock.

Finally, we want to remove some of the harshness. Therefore, we set the blue FREQ-knob to just under one, and the corresponding HIGH-gain-control to eleven o’clock.

As a last step we activate the dynamic functionality of the EQ by clicking on the DYN-knob. Now the EQ will react in conjunction to the incoming signal, which eventually results in a more organic, and musical sound. 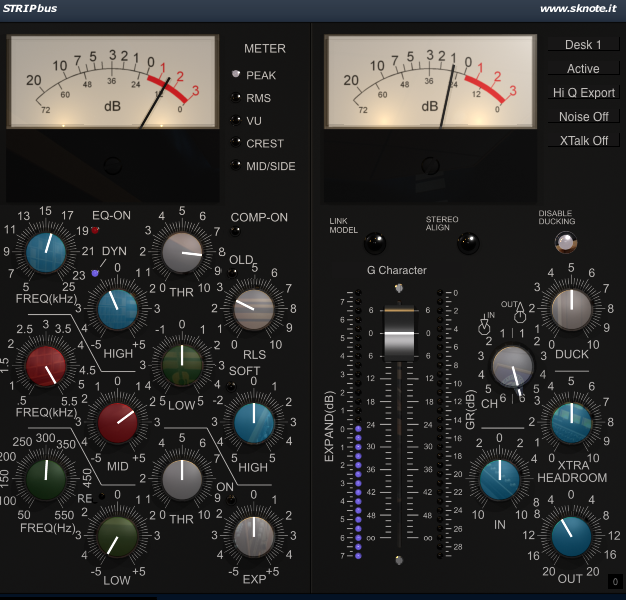 Despite the fact that we only engaged the ‘G Character’ console and did some tweaks to the EQ, you will notice that the processed guitars sound a lot more convincing than original ones:

You can download the preset for Strip V3 here: stripv3-g-character-thrash-metal-preset-fxp