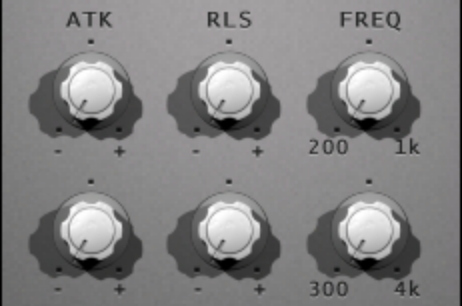 Today we’re going to look at how we can use Mattertone in a mastering scenario. Let’s say we’ve just received a final mixdown or pre-master of a modern metal song, and we want to give it the final touch. After listening to it a couple of times we can say that the mix is pretty solid in general. However, there’s one thing that stands out – or rather does not stand out – and that’s the snare drum. It sounds a little dull and could definitely use some more brightness and definition.

Of course we could reach out to the mixing engineer and ask him to send us an alternative version of the mix. But this takes time (also known as money). Another (and more convenient) way to deal with the issue is to use a nice, little plugin called Mattertone. Being a multiband envelope shaper, Mattertone allows us to focus on a specific frequency area, while leaving the rest of the mix untouched.

We start by placing an instance of Mattertone on the audio track. In order to be able to bring out the snare drum we need to know which frequency range to concentrate on. In our case, one relevant area is around 3kHz. Enhancing the mix in this area will bring out top-end of the snare, thereby bringing it more up to the front. Thus, we set the upper FREQ-control to 3kHz, and then turn up the attack (ATK) as well as the release (RLS).

Afterwards we set the FREQ-knob in the middle to about 5.55kHz, and then turn the corresponding release-control slightly to the left. This will tidy things up (especially since we’ve just increased the release value for the upper band). Finally, we want to process the body of the snare, but only a bit. We set the lower FREQ-control to about 350Hz, before turning up the attack and backing off the release respectively. This will give the snare drum slightly weight while keeping things tight.

Time to find out what this instance of Mattertone actually did to our song!

Here’s the original version, without the plugin:

And here’s the same track, with Mattertone engaged: