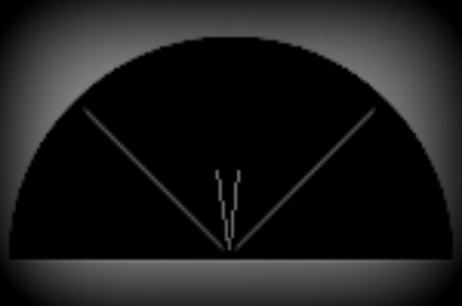 In this tutorial, we will use ThreeD to give a mono guitar some nice and natural stereo width. There are certain instruments that are typically recorded in mono, and the guitar is one of those. A common technique to achieve a big, wide sound is to record two takes of the same part and pan them (hard) left and right respectively (this is also known as ‘double-tracking’). While this method works well in many cases – especially when dealing with distorted guitars – there are some scenarios in which one might want to look for an alternative way to expand the stereo width…

Here we have a short recording of a clean guitar:

It sounds nice already, and we feel that double-tracking would literally be ‘too much.’ That’s where ThreeD comes in…

We insert an instance of ThreeD on the audio track. First we need to choose a mode via the drop-down menu at the top of the interface. Since the recording is in mono, only those which start with ‘M [mono] -> S [stereo]’ are in line for the job. We go for ‘M -> S Delay.’ This mode actually works somewhat similar to double-tracking: it creates two signals for the left and right channel, one of which is then slightly delayed to create an artificial stereo width. The advantage of using ThreeD is that we have much more control over the strength of the effect.

We set the big WIDEN-knob to about two o’clock. This will give us more width, without creating too much of a delay effect. The FREQ-control determines the crossover point; everything below won’t be affected, i. e. stay in mono. This control is also crucial for the overall sound. If we turn it all the way down the delay effect would be too obvious, which is not what we want. Therefore, we set it to ten o’clock. The COLOR-control, finally, is highly dependent on the global working mode of the plugin; its position can either have a major or a minor impact on the effect. In our case we set it to about ten o’clock as well.

Our goal was to gently create some stereo width, without altering the overall tone of the recording significantly. If you now listen to the guitar with ThreeD engaged, you will notice that we pretty much achieved that goal with very little work:

You can download the preset for ThreeD here: threed-mono-stereo-guitar-preset-fxp