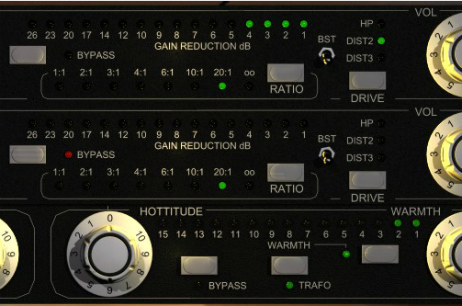 Please note: You will need the latest version of Disto for this tutorial. If you haven’t updated to V2 yet, please download it from your user area first.

One of the coolest new features in Disto V2 is definitely the dry/wet-control, adjustable via the middle knob on the right side of the interface (not available in M/S-mode). This means we can blend a heavily compressed with the dry signal, thereby adding much more body and weight while still maintaining the precious dynamics of the original sound. In this tutorial, we will show you how to set up Disto for parallel processing during the mastering stage.

First things first, here’s the track we will be working on:

Notice the fairly wide dynamic range of the song – that’s definitely something we want to preserve, which is why a mix of processed and unprocessed signal is just the right way to go!

The Power of Two

We kick off by placing an instance of Disto on the master buss, followed by a limiter to avoid clipping as well as bring up the overall level later on. Before we deal with the dry/wet-control, we set up the plugin as usual: By choosing the HP2-option in the upper (compressor) section we prevent the very low frequencies from messing up the sound. High values for attack (ATK) and release (RLS) will provide us with a rather gentle compression effect. That is often desirable when mastering music. Since we are going to set up Disto as a parallel effect, we can go for a quite high ratio of 10:1, and turn the GAIN-knob up so that we get a decent amount of gain reduction (between 6-8dB). For the same reason we flip on the UK-switch, which will make the plugin’s behavior a little more aggressive.

Tip: Toggle the new Auto Gain-switch (AG) in the upper right corner after you set up the compressor controls to match the input with the output level.

To (quite literally) round things off we engage the WARMTH-feature by clicking on the button next to it and turning it just about a value of 2. This will not only fatten up the mix, but also gently remove some of the harsh frequencies.

Now it’s finally time to get the dry signal back in the game, so we set the dry/wet-control to the middle position (5). When you’re working on your own material, feel free to experiment with different values – just remember that the default position of the knob (0) means 100% wet (whereas a value of 10 would be 100% dry or bypass).

All right, let’s find out what our example song sounds like with 50% of Disto, so to speak 😉

As we’ve already expected, the result comes along a lot richer and more powerful than before – yet without being squashed into oblivion.

You can download the preset for Disto here: Disto Parallel Master Bus Preset.FXP