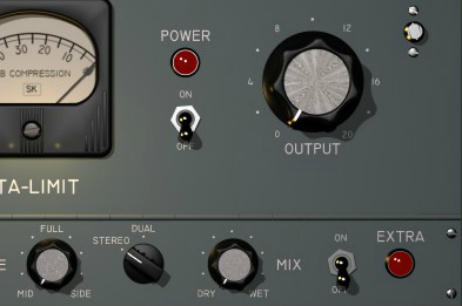 So called New York- or parallel-compression is a very popular technique in mixing and mastering alike. The idea behind this concept is simple, yet effective: Instead of processing the complete audio signal at once, it is divided into one dry and one (heavily) compressed part, which are then blended together again at the output stage. This way the final result will contain the original’s dynamics and transients, while also being beefed up by the compressed track. Back in the day, this method involved a little bit of hassle, because one often had to create two separate tracks for the dry and the processed signal. Nowadays, however, things have become a lot simpler thanks to the mix or wet/dry-controls found on many plugins.

In this tutorial, we will give you an in-depth overview on how to master your tracks the New York-style with the powerful STA-Limit compressor.

We kick off by inserting one instance of STA-Limit on the master track, followed by a limiter to prevent any peaks. As said before we’re aiming for a massive amount of compression, because the dry signal will still play along in the end. Thus we crank up the INPUT so that the VU-meter in the middle of the interface shows no less than 30dB of gain reduction, but be careful since the overall loudness will increase as you turn up the knob! We use the OUTPUT-control to bring the volume down to its original level.

Next we set MODE to AUTO, and choose the slowest RECOVERY TIME possible. The compressor now functions as a sort of constant leveler, and we can avoid unpleasant pumping-effects for instance. This can be especially important when working with full- or sub-mixes.

We also engage the EXTRA-unit using the corresponding toggle switch in the lower left corner, and set up a low pass filter for the sidechain by turning the LOW-knob all the way to the left. Finally – the most important thing for us to do – we set the MIX-control to the middle position, so the dry signal will be audible again.

Ok, let’s listen to our parallel-compression in action! Here’s a short metal track with only a soft limiter on the master track:

You can download the preset for STA-Limit here: NY Mastering STA Limit.FXP