When it comes down to mastering the SDC compressor is undoubtedly an ideal choice. However, it can also work wonders on sub mixes, such as a drum bus – that’s what we will explore in this tutorial!

SDC comprises of two different compressor types, which work in series: one optical unit in the upper left of the interface and one VCA (voltage controlled amplifier) below. By default the first compressor is set to the fastest mode, MODERN. Since drums usually contain numerous transients we will stick with this so that the plugin can easily react to every single hit. We lower the OPTICAL THRESHOLD until we get an average gain reduction of 5dB (indicated by the left VU-meter). We can then use the OPTICAL GAIN knob as a make-up control.

Next we turn on the VCA unit (DISCRETE IN) – the green light on the left means that this part of the compressor is now active. After that, we make sure that the SIDECHAIN-switch is set to IN, because we don’t want the kick to mess up the whole sound. As a rule of thump, it’s often a good idea to work with long ATTACK and short RELEASE times when processing drums. In doing so, we can ensure that the initial impacts of the transients won’t get squashed down while the short release time sets back the compressor after every hit, so to speak. A DISCRETE RATIO of 3 will be enough to give us the desired effect. We turn the DISCRETE THRESHOLD down so that the maximum gain reduction is about 5dB as well (indicated by the right VU-meter). Having adjusted the DISCRETE GAIN to compensate the loss in volume, we finally set the TRANSFORMER-switch to the middle position (IRON). This will give the sound a nice sonic color without altering it too much. 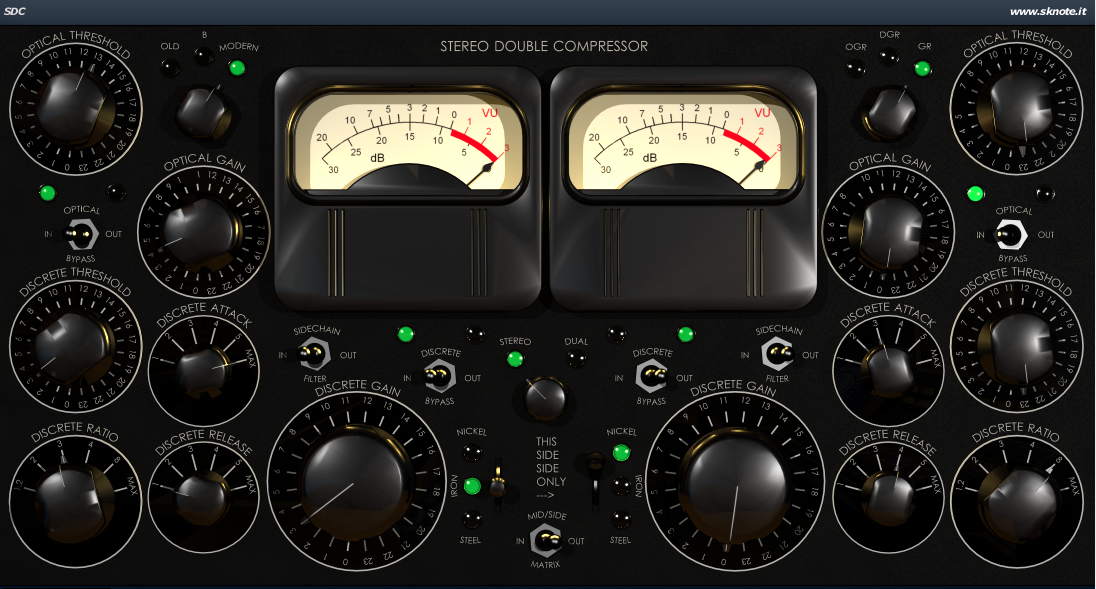 All right, let’s hear what all this sounds like in reality! Here’s the sample track without SDC engaged:

And here it is with SDC on the drum bus:

It really sounds a lot bolder (if just listen to the toms for instance), and due to the compression it’s been all glued together nicely. What’s more we even brought out the great room sound a little more, making the drums sound more natural.

You can download the preset for SDC here: Huge Rock Drums SDC Preset.FXP