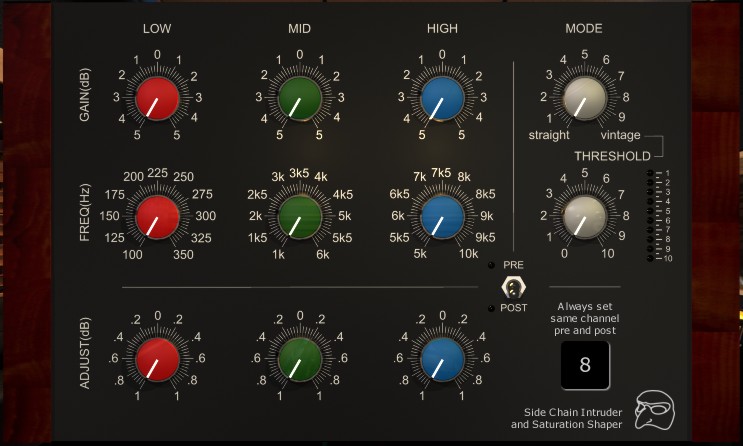 The Fooler is pretty much a one-of-a-kind plugin: It gives you detailed control over the sidechain signal of literally any compressor there is – even if a particular one doesn’t offer this functionality at all! In this tutorial, we will use the Fooler to process some metal guitars, thereby showing you what you need to take care of when using it.

The guitars have been recorded twice (one for each side) and then sent to a bus with an instance of the C165a VCA compressor on it. This plugin actually does include a sidechain, but we won’t use it now, of course. Before we actually get to work with the Fooler we set up the compressor just as usual.

One of the most important things you need to know about the Fooler is that you’ll always need two instances of it in order to make it work properly: one placed before and one after the compressor.

The first instance is the crucial one, because it will shape the sidechain signal that is fed into the compressor. It only uses the controls above the line so we can ignore the three knobs at the bottom of the interface. We check that the PRE/POST-Switch is set to ‘PRE’ and then move on to the 3 band EQ. By turning down the LOW-GAIN to the far left and the FREQ-control to the far right we create a similar effect like a high pass filter at 350Hz. We then crank up the MID- as well as the HIGH-GAIN to about 4, and set the FREQ-knobs to 3kHz and 6k5Hz respectively. This will increase the amount of compression in these frequency areas and therefore enrich the overall sound of the guitars.

After that we turn up the MODE-knob to just below 9 before setting the THRESHOLD to 4.5. The meter to the right should display a (high) value of 8, which means that the signal gets slightly ‘pushed’ before it reaches the compressor. In the end, this will introduce some nice saturation and give the sound a rich tone. Finally we choose ‘1’ from the drop-down-menu at the bottom right (this number should be the same in both instances).

The interface of the first instance should now look something like this: 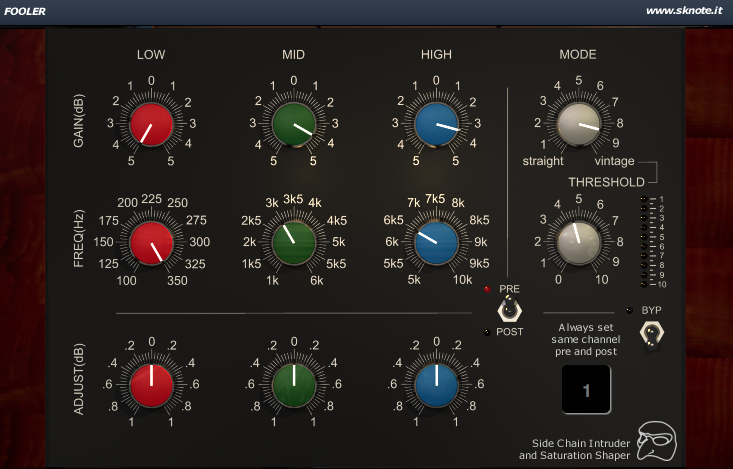 Now it’s time to configure the second instance of the Fooler. As you might probably guess the PRE/POST-switch should be set to POST and the drop-down-menu should be set to ‘1’. The only controls that are relevant here are the ones below the line, and they can be utilized to gently shape the timbre of the sound. In our case, we turn down the red knob (lows) and increase the blue one (highs).

The interface of the second instance should now look something like this: 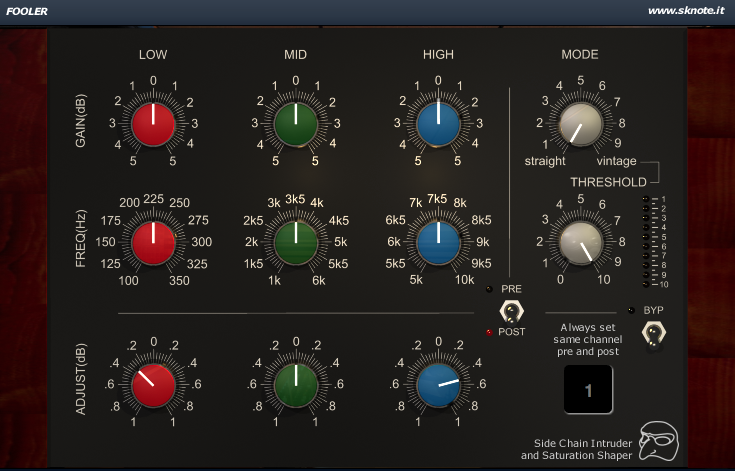 Now that we’re done, it’s time to listen to the final result:

The changes aren’t dramatic, but still the guitars sound a little more ‘together’, with more weight, and also some more movement!

You can download the presets for Fooler here: Compression_Saturation_Fooler_Presets