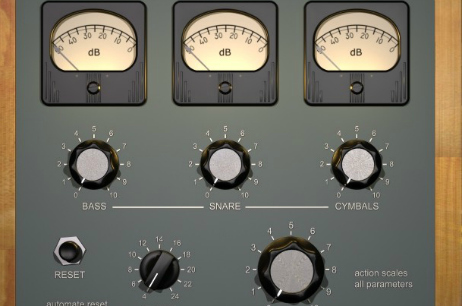 Programming realistic sounding drums, i.e. setting up different velocity values for most of the notes, can be fairly tedious. Likewise, if you’re working with a ready-made drum loop and repeat it a couple of times the overall sound might be rather static and boring than dynamic, as it probably should be. Wouldn’t it be great to resolve those issues with as little hassle as possible, maybe even by using just one single plugin?

Well, there is really such a convenient solution, and it’s called PolyJam! This little tool can really help you bring life and excitement to your drums, whether they’re poorly programmed or short loops. In this article, we will show you how PolyJam enhances an acoustic drum kit in a metal mix.

Here’s the example track without the plugin:

The problem here is exactly the one described at the beginning: Every hit has got the same velocity, and therefore the drums sound quite artificial instead of organic.

We start by inserting PolyJam on the drum track (or bus, if you’re working with individual tracks for every part of the kit). The interface of the plugin features only a few controls, which are rather self-explanatory as well. The BASS knob goes to take care of the low frequencies (i.e. kick drum). Since the kick is very important in a powerful song like ours, we set it to 8 to add a lot of energy to this sound. Next comes the SNARE knob, which, as you can assume, works on the mid-frequencies where the snare is usually located in a (drum) mix. We choose only a value of 1 that will nevertheless do the trick. Finally there’s the CYMBALS knob, affecting the high frequencies and thus hi hats and cymbals. We turn it up to 4, because we don’t want to overdo it – as you might already know from your experience too many high frequencies can easily create a harsh sound.

The next two controls, RESET and STEPS, could perhaps need a brief introduction. As implied by the annotation below the RESET switch, it sets back the internal ‘clock’ of PolyJam, so to speak. For instance, if you automate it right at the beginning of your song the plugin will always create the same effect(s). If you don’t automate it the software will internally begin at that point where it last stopped, even if you stop the playback in the middle of the arrangement and start again from the beginning. In a word, if you would like to see the same result every time you hit the ‘Play’ button of your DAW you should automate the RESET switch while otherwise this isn’t necessary.

The last but one control is called STEPS. The plugin will detect and count every drum hit, and set the round robin back once the corresponding number of steps is achieved. Our audio example includes two main drum loops, each with a length of four bars. Hence, it makes sense that we set STEPS to 16, because one bar contains 4 beats (or steps).

Finally, we adjust the ACTION knob, thereby defining the overall strength of the entire plugin. A value of 4 will be enough in our case, but you’re of course free to experiment any time!

All right, time to get back to our metal song – let’s find out how PolyJam helped the drums to literally come to life!